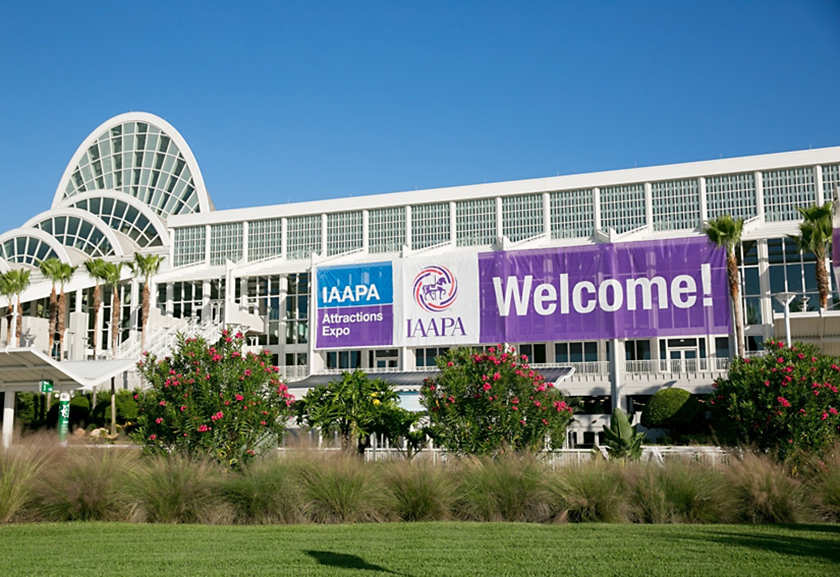 The four-day long spectacular marathon of entertainment equipment IAAPA Attractions Expo 2017 has ended. We have been closely watching the events in Orlando and finally time has come to bottom-line the exhibition and our participation in it.

As we all know, nothing can compare to a first-person narration. Therefore, we asked Sergey Tereschenkov, LASERWAR CEO and the immediate participant of the event, to share his impressions with us. Our delegation hasn’t returned from the exhibition yet, so we managed to get a brief telephone interview. 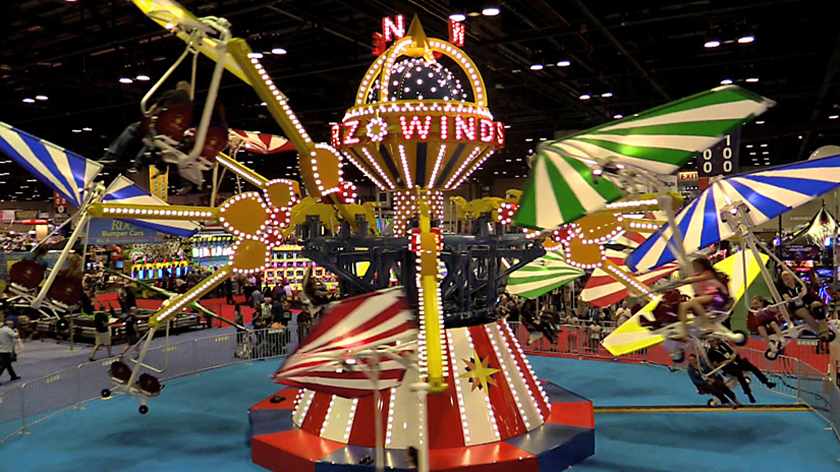 Q.: Sergey, what was your first impression about the exhibition?

A.: IAAPA exhibitions are held all over the world, but the American exhibition is rightly considered to be the largest one. It is simply an unthinkable kaleidoscope of sounds, colours, visual effects, a whirlpool of clients and visitors. Not to get lost in the middle of the carnival, to get visitors interested are rather hard tasks to perform. But I can say that we did it. Both common visitors and our western “colleagues” found our stand invariably appealing. The representatives of the companies that had received acclaim all over the world stayed at our exposition for quite a while and found a lot of interesting things for themselves. We managed to chat with many of them. 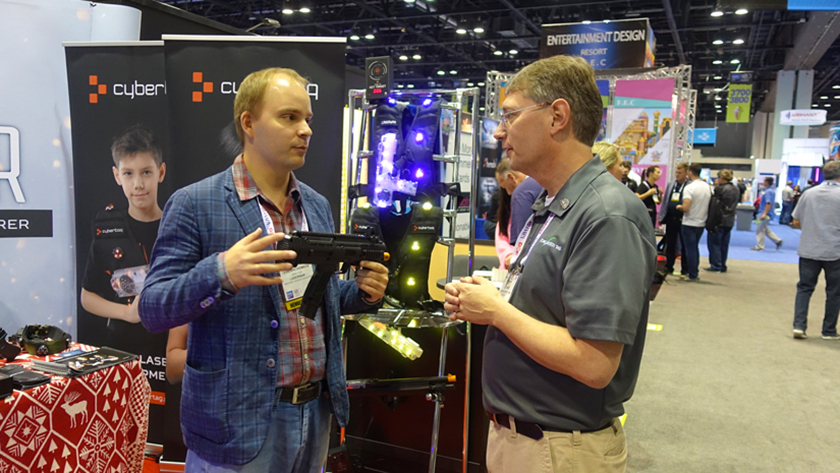 Besides those who visited our stand for the first time, we met our old good friends. Our clients from abroad frequently use exhibitions as a chance to meet with us in person and so come to our exposition. We always give them a very warm welcome. The representatives of the American Laser Tag Museum, with whom we are on very friendly terms, called on us, too. At the end of the exhibition, we handed over to the museum the Russian laser tag ushanka with defeat sensors, specially made for the USA exhibition and a laser tag grenade produced by our company. They will be exhibited in the museum along with the Predator. 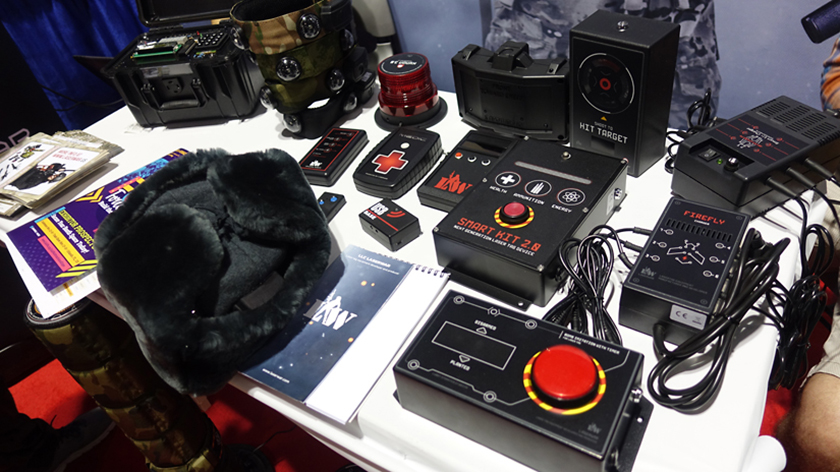 Q.: What are the development tendencies of the entertainment industry and how does LASERWAR fit into the process?

A.: The exhibition has revealed the main development trend, which is the onset of virtual reality in all its expressions. Right now, there is a boom of VR industry – virtual reality, augmented reality, the 3D reality, which is already taking a back seat – the humankind is gradually sinking in the quagmire of the virtual world. Seeking new strong emotions without any physical effort can play a cruel trick on people. In this way, an electrode connected to the pleasure centre in the brain of a laboratory rat, makes it push a lever again and again thus dying of hunger and exhaustion. Game addiction is a terrible thing. 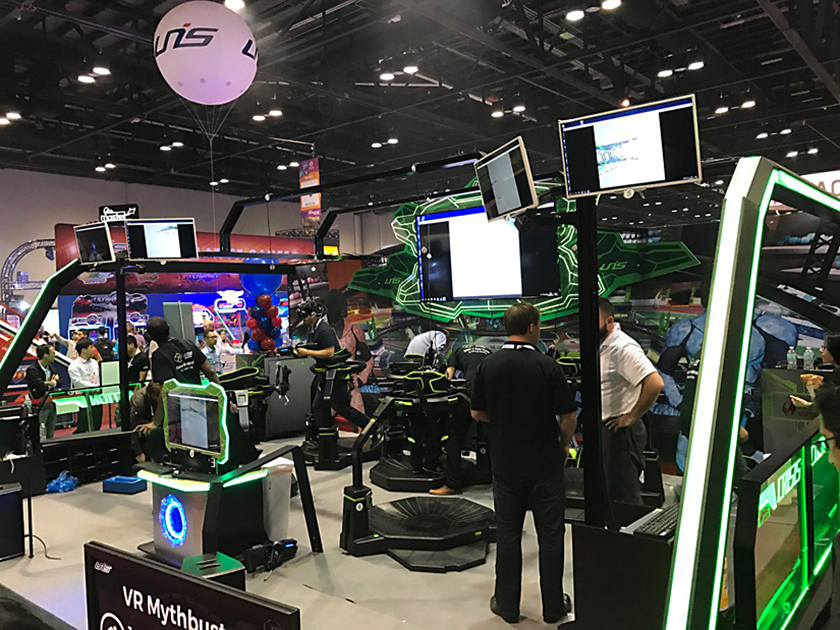 Yet we are not in the mainstream. We resist the onset of the virtual reality age. LASERWAR slogan – PLAY IN REALITY – reflects our main objective: PLAY IN REALITY! 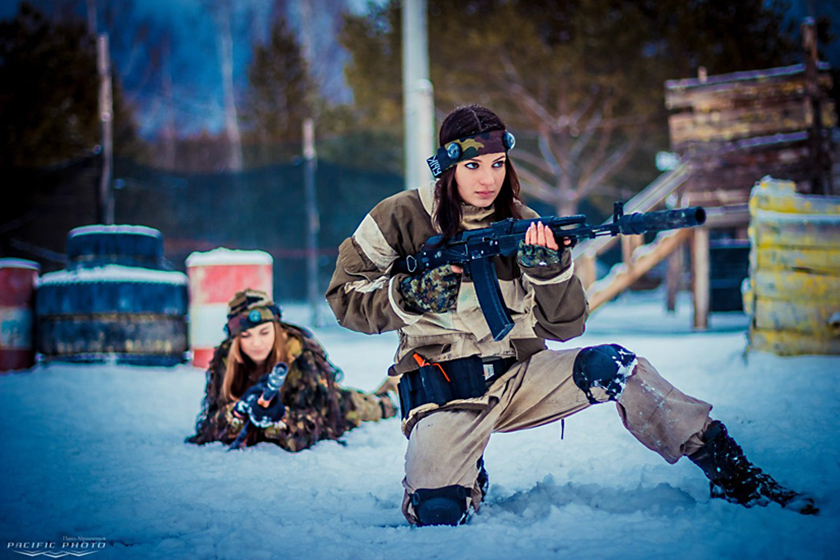 We feel the obligation to pull thousands of players from behind computer monitors so as they stopped damaging their eyesight, out of excessively soft chairs in order they ceased damaging their posture and getting all sorts of health issues. We want to show them that a live game can be more captivating than a computer one and that real interaction between friends is possible outside chat rooms. 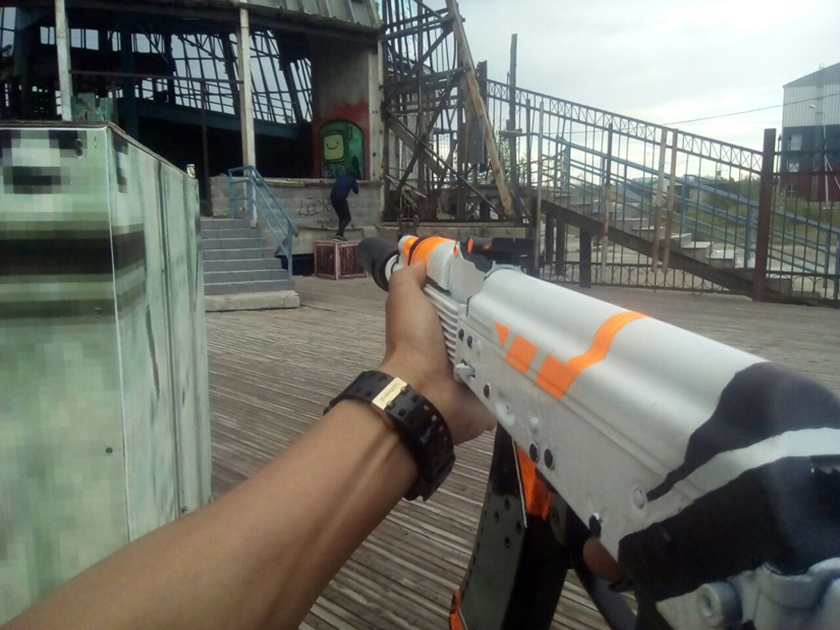 We keep improving our equipment and keep increasing its range. Some of the items have virtually come out of computer games. It is easier for those players who can find an equivalent from their game world in real life to return from the virtual reality. We are fond of games and fantasy world. Therefore, Fallout or Stalker universe scenarios using a variety of equipment and suitable setting are frequently played in scenario games. 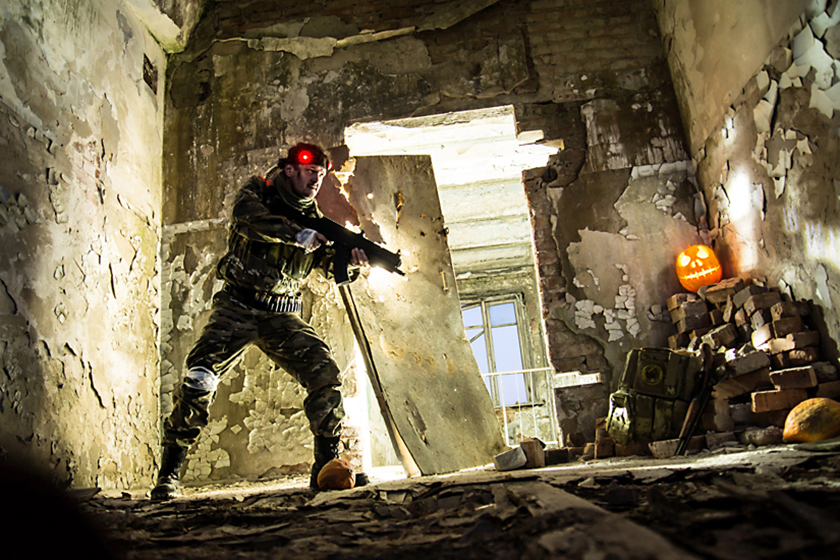 Q.: You have by now taken part in quite a number of exhibitions. What progress has the company achieved throughout this time?

A.: The last exhibition has proven that LASERWAR company has fully matured. The equipment we presented met the high standards set out by the world industry. A lot of colleagues from very famous companies visited our stand and expressed their interest in our products. Representatives from LASER TAG ZONE and BATTLE TAG and a few other well-known companies highly praised our products.

The visitors of our stand appreciated the multiple zone feature of defeat sensors, the bright OLED displays, the diverse sound range and the extensive selection of equipment. Although we brought with us far from all of our new equipment developments, they outnumbered the assortment of many producers. Visitors were frequently flabbergasted by the fact that we offer software completely free of charge. 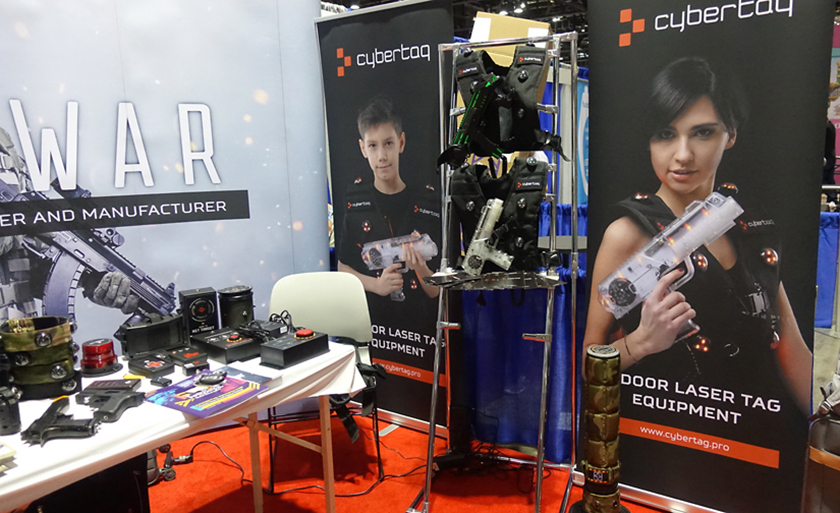 At the exhibition, LASERWAR was one of the companies that represented Russia in the US. The companies are as follows: the Moscow based Anviro VR that develops virtual reality platforms; another Moscow based company Robolabs producing equipment for popcorn – an indispensable part of the entertainment industry; the Russian Association of Amusement Parks and Attractions RAAPA EXPO and LASERWAR itself – the Smolensk based developer and producer of equipment for laser tag. Today, the company holds a strong position on the global market, we export over 50% of our products. On the regional stage of the “Business Success” national award project we won in the “Best Export Project” nomination. Our work contributes towards the budget of the region and of the whole country. 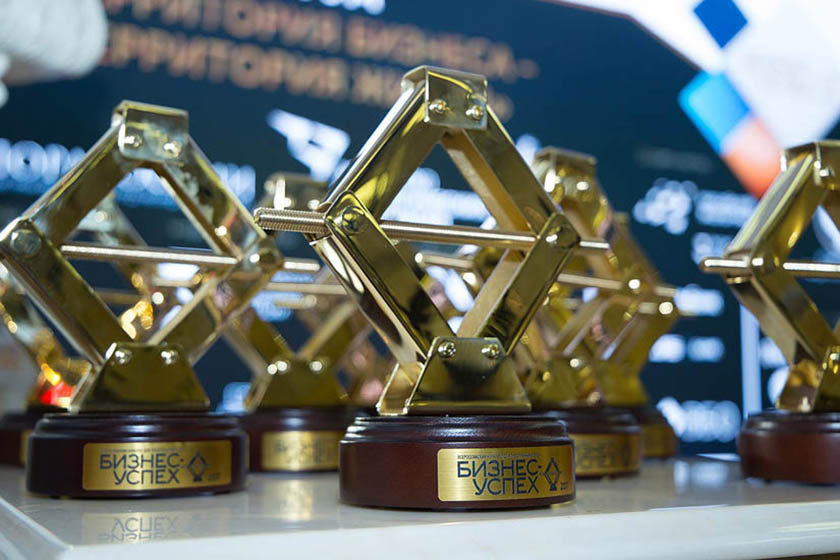 Q.: Have you encountered any contingencies during the exhibition?

A.: No, it all went smoothly. Thorough and thought out preparation and coordinated effort of the LASERWAR team that worked at the stand and had prepared the equipment for the trip, allowed us to mount the stands duly and make the most of these four days. None of the equipment pieces failed. We took with us just the right number of devices. The marketing materials and commercial offers fully complied with the level of global brands. I’d like to tell those who had planned for and had organized the trip: “Guys, you are the best!” 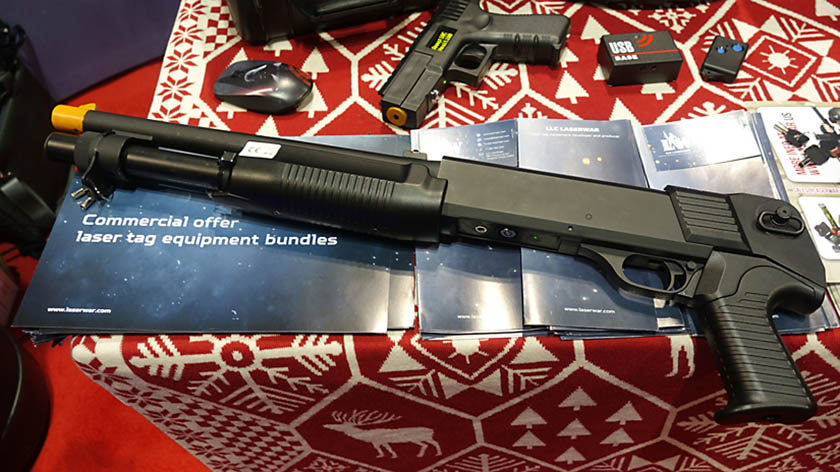 Q.: What are your future plans?

A.: We’ve been developing, scaling up the production, designing new equipment. Now, it’s high time to summarize the annual results. Now it is hard yet interesting – we’ve got the chance to create the history of laser tag and watch it evolving. It depends on us, the producers, and on you, the players, what it is going to be like. Come to laser tag – Play in Reality! 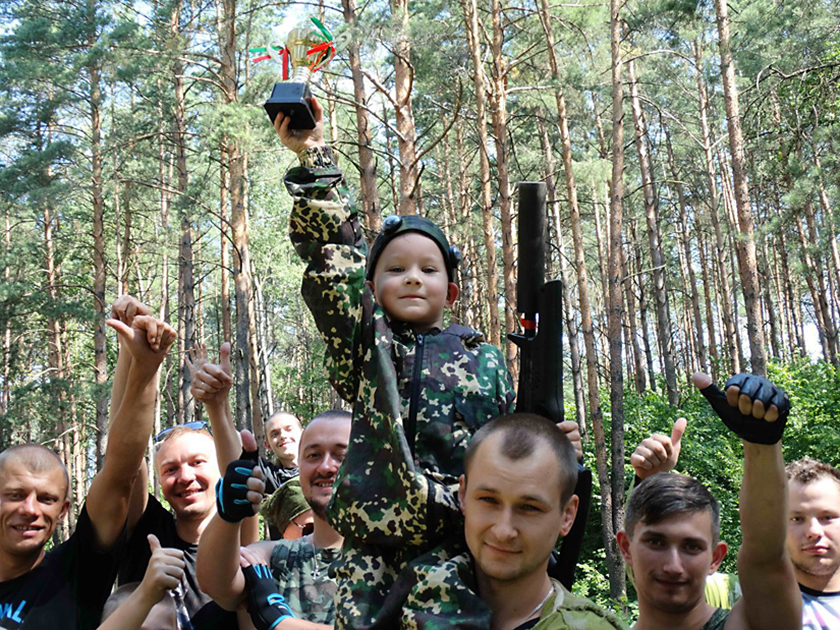