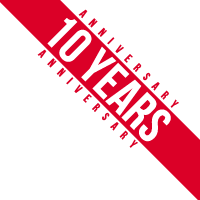 10 Years
Anniversary
The timeline of the company development is a long process. Over the period of creation & evolution that has extended over more than 10 years we have worked our way from simple electronics integration to the development of our own control circuit boards & blaster bodies. At the moment, the company workforce numbers more than 70 people: programmers, engineers, constructors & designers develop the blasters & devices that are going to be used by players all over the world.
2019
is
27000+
operating rifles
Over the last 10 years, we have integrated electronic components into thousands of unique laser tag bodies. We are aware of every subtlety & know every detail of the matter. The professionalism of LASERWAR workers & the fact that they stay fully absorbed in what they are doing guarantee the stable operation of the equipment.
245+
play sets & additional equipment pieces
We produce various types of equipment. At our store, you will find assault rifles, sniper rifles, pistols & even play grenades. Additional LASERWAR equipment will allow you to experience laser tag in new ways. Our devices will make it possible for you to h≤ effectively even difficult situations that may arise during a game. That means that even if you want to blast tactical equipment, our devices will easily cope with the task. Its effectiveness has been demonstrated during international games.
5
unique laser tag bodies
We take pride in our blasters. They were designed by LASERWAR specialists from a scratch & the features of modern military tactical games have been considered during their creation. For the time being, we believe them to be the best products that can be found on the laser tag market all ver the world. Impact resistant bodies, the internal arrangement of electronic components, certified scopes, the powerful audio output & the fact of its being ergonomic – you won't find same price-quality ratio offers anywhere else in the world.
2650+
laser tag clubs all over the world
Our play sets work in any weather & climate conditions. Our play sets demonstrated their reliability both during internal company tests & in harsh game conditions. Our products have been rightfully placed in the International Laser Tag Museum.
40+
operating laser tag arenas
Besides the milsim trend, we also produce equipment for indoor laser tag. Having thoroughly examined & evaluated the equipment by leading world companies, we realized that we could make a product that would be just as good in quality at a competitive price. In 2015, we presented a new br& – CYBERTAG. Over 40 new arenas have been opened with this equipment all over the world. Online statistics, own software, more than 20 scenarios, ergonomic vests & strong blasters – this is what CYBERTAG is about.
200000+
players all over the world
We have own traditions, own culture, own followers, own community. Year in & year out, LASERWAR has been systematically cultivating its community, promoting the formation of rigid framework of rules & principles for international tournaments. We are flattered by the fact that throughout these years, our clients have remained loyal to us & trust us with their time & emotions. During this time, we haven’t just acquired new customers, users of LASERWAR equipment – we have become close friend with many of them.
Biggest annual
laser tag games
We love big games with over 500 participants. At such events, one realizes the true scale of laser tag. We don’t just love taking part in such games – we organize them on a yearly basis. Laser tag tournaments that are held in May gather together hundreds of people who love & highly regard tactical games. In 2016, the event was visited by 570 players. MLT is an event with a considerable educational element. Not a single producer in the entire world can boast an event of such a great scale.
2000 m2
production area
The assembly process of a play tager is highly technological & rather complicated. In order to avoid inaccuracies & faults, we use professional automatic assembly lines. This allows us to obtain more circuit boards within the shortest possible periods of time & to ensure invariable high quality. The multiple stage system of testing the operating quality of blasters rules out production faults & secures the reliability of the final product.
Recognition
on the world laser tag arena
We have taken part in the biggest international exhibitions of game equipment: IAAPA Attractions Expo, Euro Attractions Show, Asian Attractions Expo. LASERWAR play sets gained the highest marks & were acknowledged by exhibition visitors. This acknowledgement received from foreign customers signalizes that our work has been successful.
We strive to achieve the point at which the word LASERWAR will become clearly associated with the word "quality”. We have adopted a responsible approach to the things we produce for we know that an overall impression is created by a combination of details. This principle has been helping us grow & develop in the last 10 years.
Shopping now
Privacy Policy Copyright © 2019 LLC LASERWAR. All rights reserved.