This video allows you to quickly learn about all the advantages of the AK-15 "Ratnik". Enjoy watching :)

In AK-15 Ratnik we used the latest technologies of our own development and the most innovative solutions from the IT world. 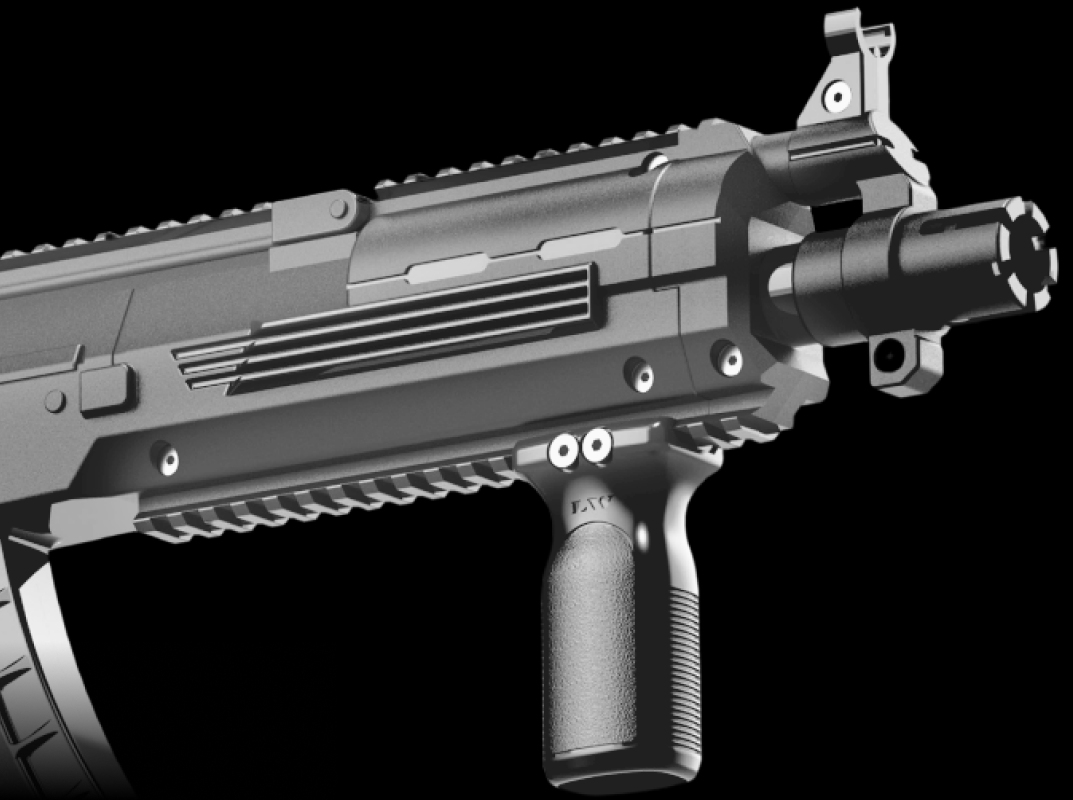 We know firsthand what tests laser tag equipment undergoes during battles. Therefore, all models that we recommend for rental have increased durability parameters. The cast body of AK-15 is made of shockproof amorphous polymer. The material has an increased viscosity. It neither breaks nor cracks. Numerous crash tests have been proven: the gun can withstand a fall from three floors, and you can throw it even at a brick wall. It is not afraid of winter frosts, heavy rain, dust and dirt. The tagger will last a long time and will not let you down in the middle of the game. It's a smart way to invest into equipment.

We have improved the design by taking another step towards realism. Bolt reloading adds to the authenticity of the weapon. It looks like on in the original Kalashnikov assault rifle. Manufacturing of the bolt is the work of our engineers, who cast the part from impact-resistant plastic. We are confident in quality because we control the development, production and assembly process – a complete production cycle.

Change the fire modes with just one motion

Bolt reloading made another technical innovation possible. You can change fire modes: automatic, single or burst. This fire switch mode button is located on the body, it previously was used for reloading. The button is made in accordance with IP67 protection standards and is perfectly protected from moisture and dust, does not fall off and has a positive action after pressing. Play laser tag in a smart way: save ammo by changing firing modes in one motion. While your opponents are wasting time, the victory is yours.

The AK-15 features an advanced trigger. For the first time we used a contact free shot switching system based on the Hall sensor. High-quality neodymium magnets provide excellent firing accuracy. No misfires or delays - the trigger responds to your each press.

The usual trigger mechanism uses a micro-switch, which contacts are oxidized from moisture over time. There's nothing to oxidize in an upgraded trigger. The contact free trigger system is protected from any external influences of the environment - it is not afraid of humidity, shocks, mechanical loads. In the new version, the wear resistance of the trigger has been increased many times. The mechanism can withstand an infinite number of clicks and will survive hundreds of games. You won't have to spend time and money on frequent repairs. 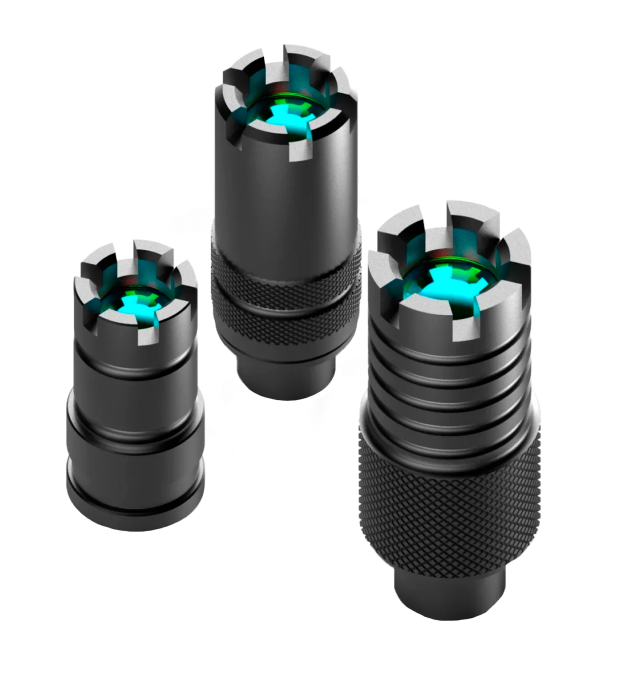 The Warrior is not only durable but never misses the target. That's because it's equipped with the best existing optical system for laser tag – Parallax. With that system, the AK-15 is three times more accurate than taggers with the classical LASERWAR optical system – Prism. The ricochet frequency has been reduced several times. The range of fire with Parallax is on average 63% higher than with Prism. The narrow killing spot is the ability to hit the target at a distance of up to 700 meters. To hit the opponent, you need to aim carefully – just like in a real battle. It'll take a little longer, but you won't have to worry about battery power: with the Parallax, you can play with the tagger 28% longer. With such a battery all your dreams will come true.

In this game set the foresight is integrated into the optical tube body and is on the same axis as the Parallax. It provides not only durability, but also ensures excellent aiming accuracy. Such system is traditionally used in combat models: AK-47 and AK-74. Its effectiveness has been tested in real military operations and confirmed by professional military personnel. Professionals around the world recognize this technology as the best one. We trust their experience. And you? 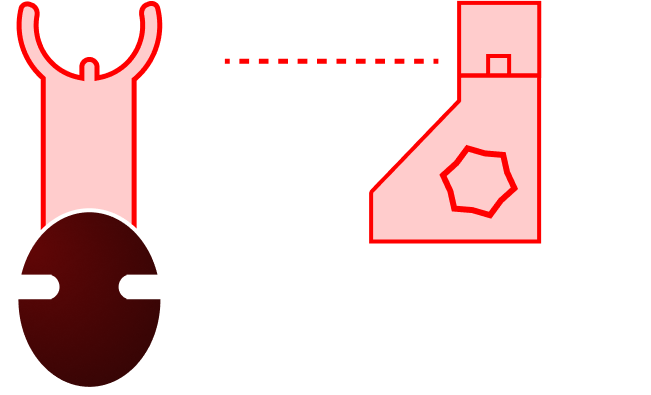 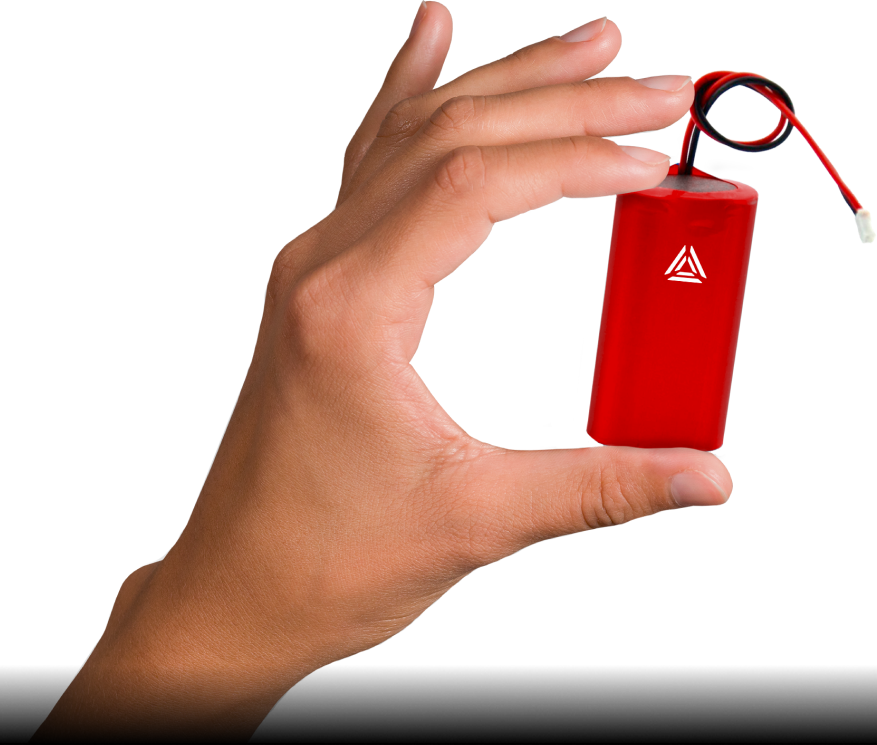 Ability to increase operating time up to 108 hours

Are you the owner of a popular rental club, where one game follows another, so there is barely enough time to charge the equipment? Or maybe you are an experienced player who prefers daily scenario games and does not want to look for a socket during the event? AK-15 Warrior is what you need. Install an extra battery or and play two or even three times longer! The weapon grantees 72 hours or as many as 108 hours of continuous operation instead of 36 hours. AK-15 is without a rival.

Another exclusive LASERWAR technical solution. A special protector made especially for the Warrior. The impact-resistant plastic was used in its production. The rubber protector gives the tagger a more aggressive, impressive appearance. One look is enough to understand: it's better not to argue with the owner of such a weapon!

The feedback technology gives players a unique sense of realism. No primitive tapping inside the game set. Shots, hits, missing ammo signals are accompanied by a vibration. The tagger comes alive with every shot! The recoil is gentle but you will feel it and will never miss a hit.

In addition to those innovations, the AK-15 absorbed the best features of its predecessor: AK-12LT Predator PRO.

Winstar branded OLED displays provide a high level of contrast and sharpness, they do not glare in the sun. With the AK-15 it is comfortable to play at any time of day: in daylight the screen doesn't light up, in the dark the information is perfectly visible even from a distance.

The display shows only the information that the player really needs in battle - the number of remaining hp and ammo. When you turn on the game set, the screen displays default values: a player ID, team color, battery charge and other parameters. While reloading the weapon, you will notice a beautiful time count animation on the display, so you always know how many seconds you have before you go into battle and can prepare for the start of the fight.

The AK-15 uses a smart audio technology. The socket is designed to resonate with the diaphragm of the speaker to produce the highest possible sound volume. The quality 57mm PRO Signal speaker delivers a rich and clear sound. It is not afraid of water and dirt and will serve longer.

All the sound effects you hear when playing with LASERWAR game sets are created by us in a professional studio. The perfect sound of the Warrior is the result of many hours of work on the audio material. It is how the first-class sound of our game sets is born.

We made sure that the new model was not only spectacular in appearance, but also functional. The little thing that distinguishes the Warrior from combat weapons is the presence of a backsight for additional devices. It was created especially for LASERWAR game sets based on the original sample.

Strong gun plastic was used for its manufacturing. The backsight made of this material will not be the weak point of your weapon. The backsight is 8 centimetres in size, which is close to the parameters of combat weapons. It is distinguished by a reliable mounting scheme: two hexagon screws tighten it to the top bracket of the tagger.

Owners of the AK-15 get our branded tactical grip together with the tagger. It doesn't just complement the tagger's design. The grip balances the Warrior and makes the game comfortable for the fighter.

The body is made of gun plastic, which is famous for its wear resistance and durability. Those qualities are enhanced by the increased thickness of the walls. The appearance and design reflect the best characteristics of the grips of the Magpul company — a cult American manufacturer of accessories for weapons. The roughened texture of the coating and the arched shimmering of the upper part ensure a secure grip.

The tactical grip is attached to the game set using two screws close to each other. They fix the pen thoroughly, so it is not afraid of falling and hitting. The compact size of the part (weight: 49 grams, height: 9 cm, length: 4.5 cm) is perfect for transportation and storing. The LASERWAR tactical grip is a small part with big advantages.

Branded illumination of the shot

The cool feature of all LASERWAR game sets is the unique cross-shaped illumination of the shot. The bright orange glow is a reminder that you are holding a toy weapon. The illumination complements the set of effects we've created to make the game more realistic. You have the sound, vibration, flash of a shot as if in a real gun — with this equipment everyone will feel like a hero of the epic battle.

The AK-15 is equipped with a LI+ battery with a capacity of 3000 ampere-hours. An integrated protection board guards the battery against overcharging and deep discharge. It gives up to 36 hours of battery life. And don't forget about the extra battery!

Coloring tagers on aquaprint technology! Become the owner of a unique tager!

And more than 20 color-schemes! 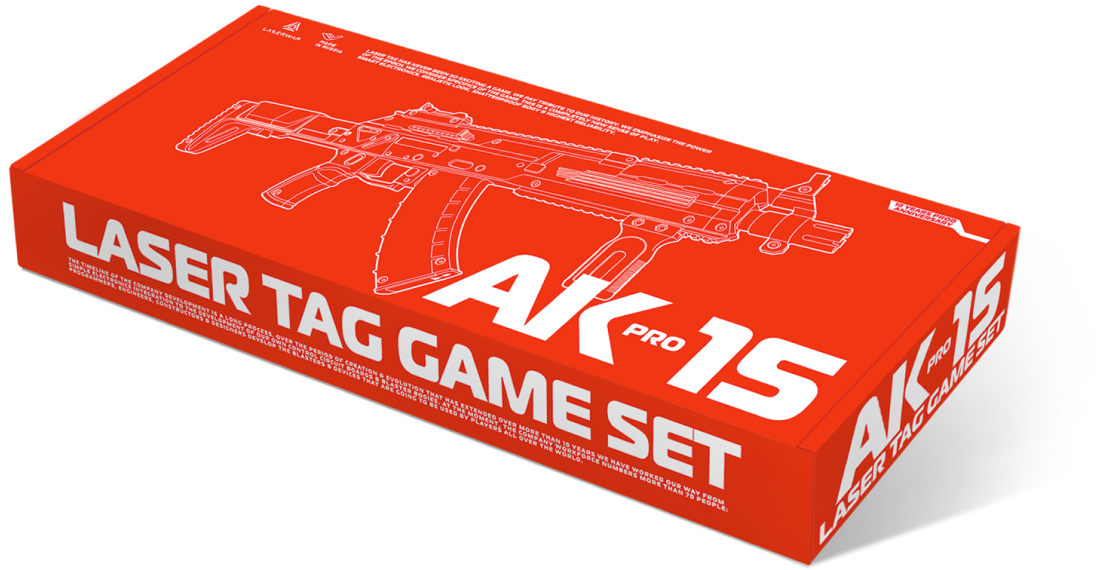 AK-15 Warrior - the new legend of the outdoor laser tag is rising!

Some things are chosen to be part of the history. A starting point after which progress can no longer be stopped. For the laser tag industry, the LASERWAR bestseller AK-12LT Predator is such a turning point.

Millions of shots, thousands of battles, hundreds of tournaments. Enjoyed by players around the world. This tagger is rightly called the flagship in the world of laser tag. it opened up new game borders. Thanks to it, the army of laser tag fans enlarged dozens of times.

It's damn good. But LASERWAR never stops improving. The continuous search for bold technical solutions and perfect forms leads us to the next vital step. To another page in the history of laser tag. To the new legend of the tactical games.

It is durable, authentic, reliable.

Do you like laser tag? Do you appreciate realism and practicality in the taggers? Then the AK-15 Warrior is your choice. 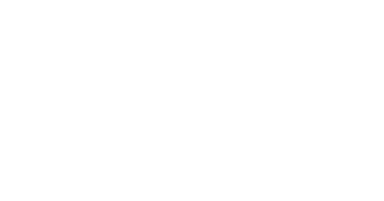