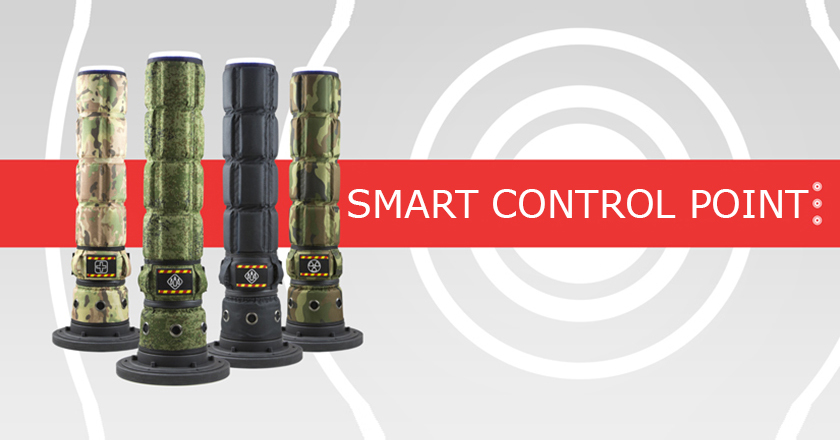 Dear friends, the moment everyone has been waiting for so long has finally arrived. Today, we are announcing the launch of sales of the smart control point. The requirements to laser tag equipment are getting stricter year by year. Players are in need of truly intelligent devices: the electronics must process all game events in automatic mode without any faults. Besides that, every device is expected to have stylish design, loud audio output, bright indication and reliability.

All these assets have been combined in our smart control point. Here are further details about the look, functions, possibilities and the cost of the device.

Our bold MILSIM style control point will look cool at any military sports game. The display, the digital sound, the statistics and the scenarios make our new control point smart in every sense.

The LEDs are divided to form 2 circular figures: 32 LEDS form an external circle, while the remaining 48 LEDs form an internal one. The external circle displays the colour of the team that has captured the device. The internal scale is for indicating the process of capturing and holding. 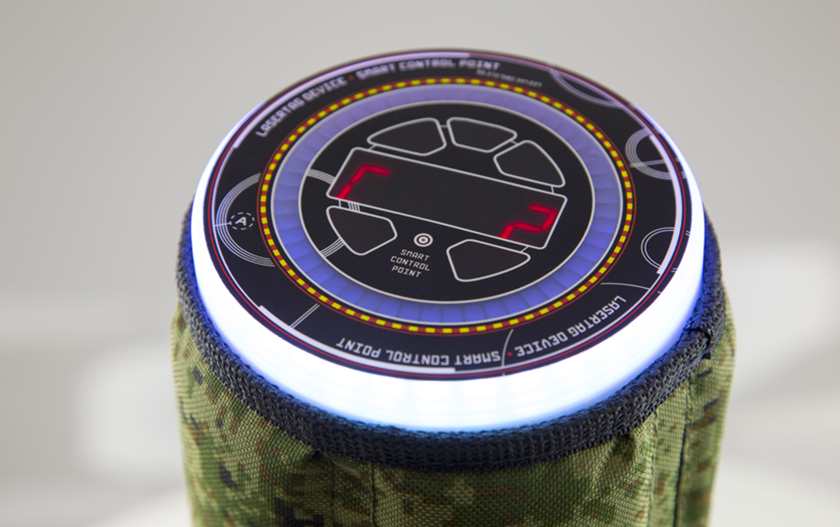 As we were designing the new device, we wanted to ensure that players wouldn’t have to keep round time in their mind and wouldn’t have to keep calculating how much time was remaining till the victory. Therefore, all these details can be viewed on the semi-segment display which is located at the top of the device as well.

There is a direct connection between the design of the indication panel and its functions. When designing a product, we always think about how convenient it is going to be to the user. Therefore, the design is void of unnecessary elements. We have integrated special areas for infrared emitters, a special frame for the display, while the internal LEDs scale is framed with a yellow and red line.

The industrial design is a characteristic feature of all the line of LASERWAR equipment. There is an invisible thread connecting all the elements from the top section. Once you turn on the control point, it will unleash its potential to 110%. The bright indication, the intense colours and the explicit modes display – this is what laser tag players all over the world deserve.

The new device is protected throughout. When developing the protective casing we drew our inspiration from the reactive armour used on tanks. The smart control point has a bold look, while all the electronic elements are well protected. There are 4 protective casing colours to choose from: black, pixel, multicam and woodland.

We have included in the construction straps for carrying the equipment. Now, players won’t have to carry the control point under their arm nor attach improvised grips to it. All smart control points come fitted with comfortable straps and reliable stitching by default. 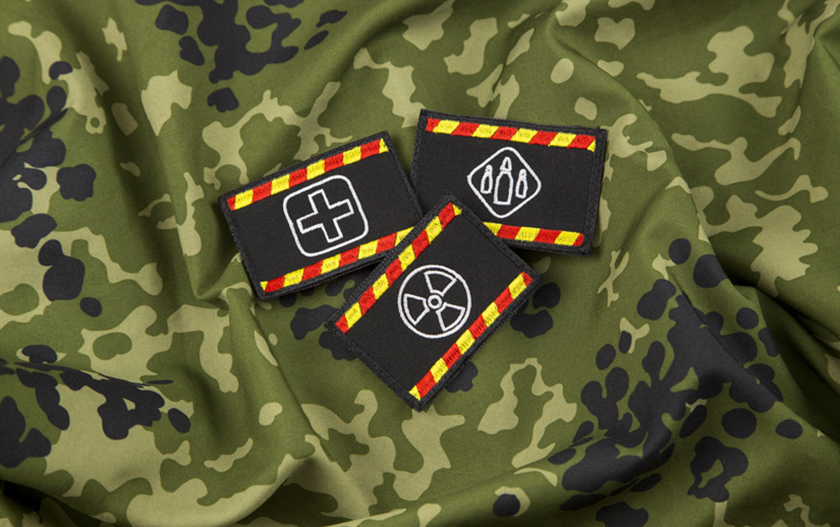 To liven up the design, we have added some contrasting elements. There are three fabric stripes with pictographs on the device that stand out against other details. You can replace them with stripes that have the emblems of your own laser tag club.

All the control elements are located at the bottom section of the control point. There are not a lot of them: an admin button, an activation switch, a charger inlet – we stick with the principle ‘turn on and play’, so no additional manipulations are required. The buttons and the inlets have been embedded into openings fitted with grommets. The fabric round the buttons won’t tear and the device will still look tidy after a dozen of games. 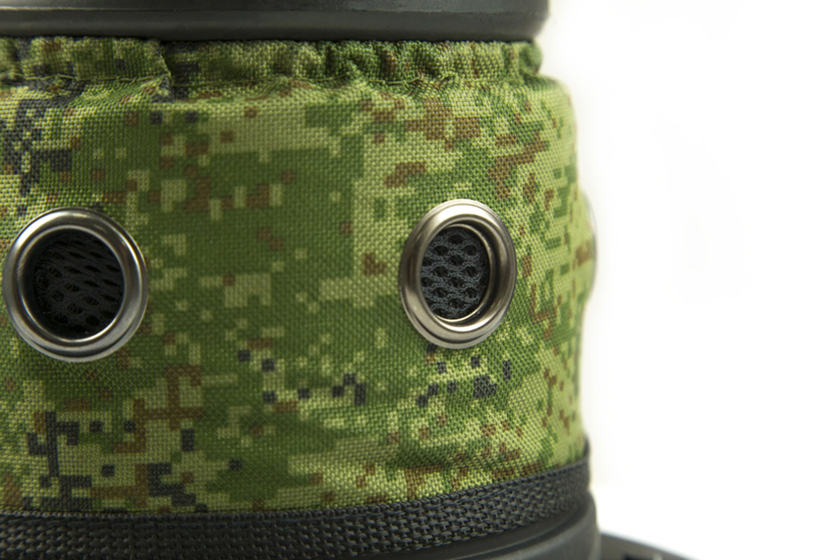 We have given due consideration to the base of the control point. To make the construction more stable, we have fixed it with a metal ring. The device will survive any strain during games and won’t become loose around the base after lengthy laser tag battles.

There is a lithium-ion accumulator inside the device with a capacity of 3000 mAh. The device will operate for 8 hours, after that it will have to be recharged. Our control point is a real revelation for the fans of large-scale and lengthy battles.

The device is equipped with a powerful speaker with a class D amplifier. Inside the stripper clip of the smart control point, there are 25 digital sounds. No fizz, distortion or beeping sound – we are sure that you will be able to evaluate the quality and range of sound.

The photo sensors of the device have been fitted in such a way that only the player near the control point will be able to capture it. Ricochets and accidental captures are now a thing of the past.

3 basic scenarios have been built into the software. In them, we have used the possibilities of the smart control point to the maximum. Now the device is not just a glowing post on a battlefield. The device can support allies, restore health and ‘award’ rivals with infrared impulses.

As we were developing the device, we drew our inspiration from the Battlefield game and indoor laser tag technologies. We took the best from various areas and combined all that in one device: the smart control point will make players sweat. We can guarantee that you will experience the joy of victory and the feeling of happiness.

In this scenario, you must capture the device by firing into it. As you shoot the device, the external ring will acquire the colour of the shooter’s team, the capture process will be displayed on the circular scale and the countdown till capture will begin on the indicator.

After a shot has been fired, there will be a short delay and an impulse will be produced through the infrared channel of the negative influence (providing that it has been preset in the configuration). After the time has run out the control point will be captured.

After the control point has been captured the external ring will flash the colour of the winning team and all teams’ capture statistics will be displayed on a circular scale.

As you push the button, you will switch between the participating teams and see the time it took each team to capture the control point.

In this scenario, there are two moments a player must be aware of: capture time and holding time. The key feature of the scenario is, the more players simultaneously attempt to capture the control point, the sooner this will be achieved.

The scenario is otherwise the same as the one previously mentioned except for the fact that the control point must be held for a certain time after it has been captured. At that, the device will memorize the holding time. After the control point has been held for a preset time, the game will end and the statistics with the total holding time for each team will be displayed in the form of a circular diagram.

Initially, a control point belongs to one of the teams (or awaits the first shot for establishing a team owner). The control point has a definite number of strength points. If it has not been damaged, after preset stretches of time, it generates a positive influence impulse for the team owner.

If a player from a rival team shoots the control point, the control point will lose the number of strength points that corresponds to the shooting power. Upon that, a negative influence impulse will be generated (if these settings have been selected in the configuration). 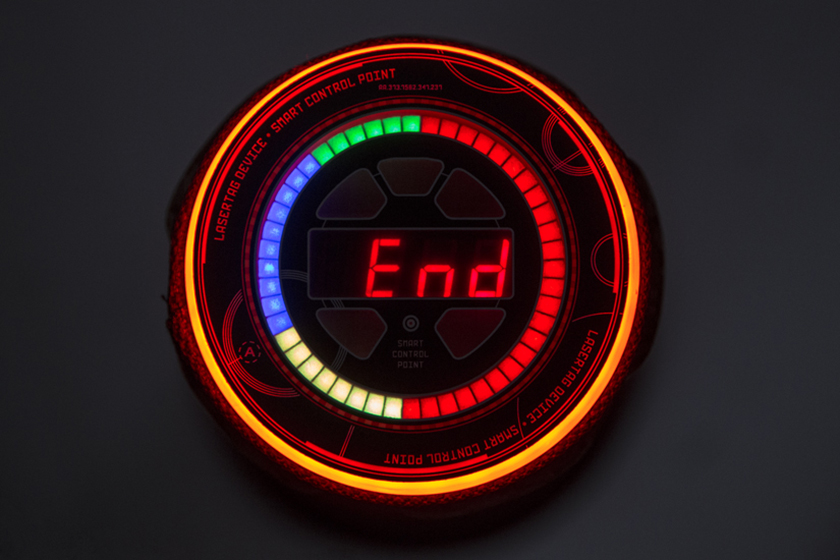 The current scenario number will be displayed on the indicator. Time left to the scenario start will be displayed on the circular scale and on the indicator. You can switch between scenarios by pushing the button. Sending the ‘New game’ command through the infrared channel will interrupt the current game and a new countdown will begin. When the ‘New game’ command is sent, the current scenario will be immediately launched or restarted.

To enter Admin mode, turn on the device, making sure that you are pushing and holding the button at the same time. When you are in Admin mode, you can change scenario settings either by means of an infrared base or on the device itself. On changing the parameter, the position that is being edited will flash. To move on to editing the older category, hold the button for more than 3 seconds. To exit parameter editing mode, hold the button for more than 3 seconds on the older category.

To vieew parameters, their range and values, follow this link.

As we have promised, we are not going to mess around with false discounts and offers. That won’t be necessary, for the price of the smart control point is just 8 800 roubles. We are starting to ship the equipment from today on. The item can be purchased from our online store.

One semi-segment display, two rounds of LEDs, 3 scenarios, 4 colour options and loads of positive emotions – that is what the control point is sure to be valued and admired for by laser tag players all over the world.