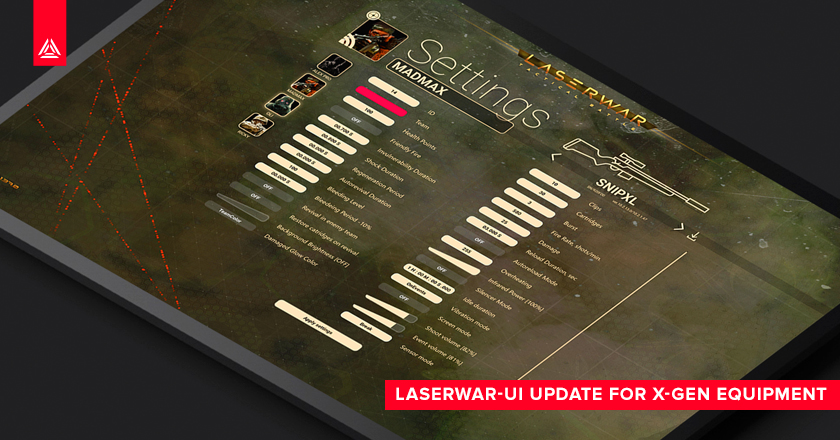 For the attention of X-GEN equipment users. A new version of the LASERWAR configurator 1.1.54.0 is available in the Microsoft Store Online. Let's take a closer look at what's new with this release.

We would like to remind you that for the correct operation of the system it is necessary to update the weapon firmware to version 19.

The new release of LASERWAR-configurator has several important improvements - the program has been optimized for different types of the monitor resolution and now shows equally correctly on the compact screen of a laptop and on the wide screen of a desktop PC used in the club.

Another improvement concerns the hardware set-up mode. The set-up section has been significantly redesigned, the screen has become more informative, and now we can control up to a dozen parameters at the same time. The configuration process has become more convenient and transparent. The animated progress bar will show the upload progress of parameters. The possibility of simultaneous adjustment of several weapons allows you to make the necessary changes literally "in just one click". All you need to do is specify the range of IDs of the weapon you want to update and press the confirmation button. Besides, the recording process itself has also become considerably faster.

A special mention should be made of the "Sounds" section, which contains 1098 new studio sounds combined into 18 presets. They are all ready to be used in your equipment. There are Russian, English and even thematic sound presets of characters, for example, "Stalker: Bandits", will please the players and significantly diversify the gameplay.

The user can create their own set of sounds (wav-format, 8 bits, 11025 kHz) or choose them from presets randomly. The recording speed has been increased more than 2 times compared to the 9th generation.

To record sounds, choose a preset, tick the boxes for the sounds you want to record and press "NEXT". Then select the recording equipment and press the "UPLOAD" key.

When you start the game after clicking "START", select the desired scenario and make sure to check the scenario settings. If necessary, correct its settings. During the launch process, they will be simultaneously registered in all weapons, which significantly speeds up the start of the game.

Friends, we would like to thank all users for helping us make our software better. Currently version 1.1.54.0 is stable and we recommend it to be installed on all PC devices. Version 1.1.55.0 with even more features will be uploaded to the Microsoft Store in the nearest future. If for some reason you have installed version 55 of the program on your PC, we recommend you to uninstall the configurator and reinstall the stable version from the Microsoft store. Follow the news, stay up to date and play laser tag.