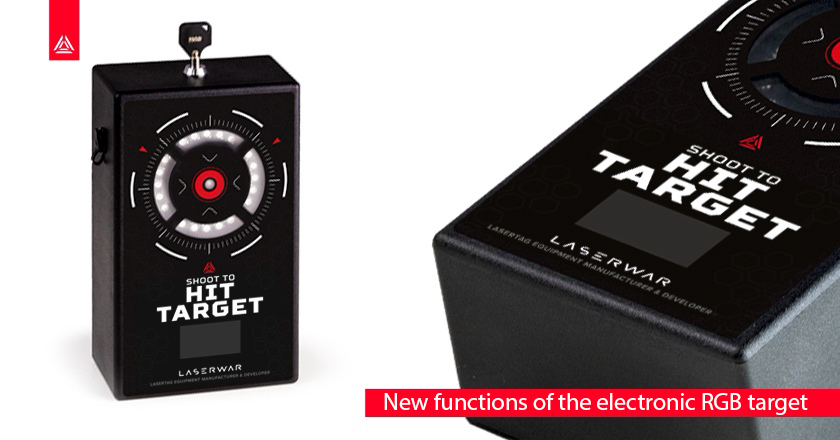 "RGB target" is one of the most discreet devices, which is always present in the arsenal of any club. This device is well known to the instructors who zero club weapons, but it is practically not used by players. However, everything is changing and the RGB target is gaining new features that make it a fascinating attraction for players in between games.

Let's consider in detail the new features of the target and their application, as well as additional settings of the game mode.

The new target mode is called "arcade" and is displayed in the settings with the letter [A]. In this case, the device works as an electronic shooting range, training not only the marksmanship of the players, but also their attention, reaction and ability to quickly aim and shoot exactly at the target.

You can hit the target with an accurate shot only when the lilac illumination lights up and the target goes into an active state, which lasts for a very limited time. The target activation time is selected randomly at a set interval. When hit by a target, it is highlighted for 1 second by the colour of the team that hit it, the device beeps and shows the number of points lost.

This target algorithm allows you to organize competitions between players and even teams, when players from different teams compete in accuracy and speed of shooting, while simultaneously firing on a randomly flaring target. And if the club has several targets, you can organize practical shooting competitions by placing the targets at different distances from the shooter and assigning them the cost of points depending on the complexity of the defeat. Hitting a few randomly activated targets is an exciting and challenging task, even for an experienced shooter.

To start the arcade game, turn on the target and set the [A] mode with the "Kill Player" command using the universal or smart Nano remote control. Wait for the animation on the indicator after 2-3 seconds and start the game with the "New Game". The target will light up at the set period of time. You can end the game by clicking "Kill the Player". Repeat that command to enter the parameter setting mode.

The "Kill Player" command is used to enter the setting mode from the universal or smart Nano remote control. If you set up the device, it won't respond to shots from the weapon. The display will show more details about the selected parameter. Entering the arcade mode setting starts with [A].

Then, by clicking successively "Kill Player" you can select one of the 3 parameters, the values of which are changed by the command "new game".

— Average duration of pauses between the target activation in seconds

— Number of points per one hit

In the Audio set-up mode, the following options are available:

— Sound is on when hit

— Sound is on when the target is activated and hit

The cost of the new target with arcade shooting range functions will be 90 dollars. You can buy it in our on-line store.