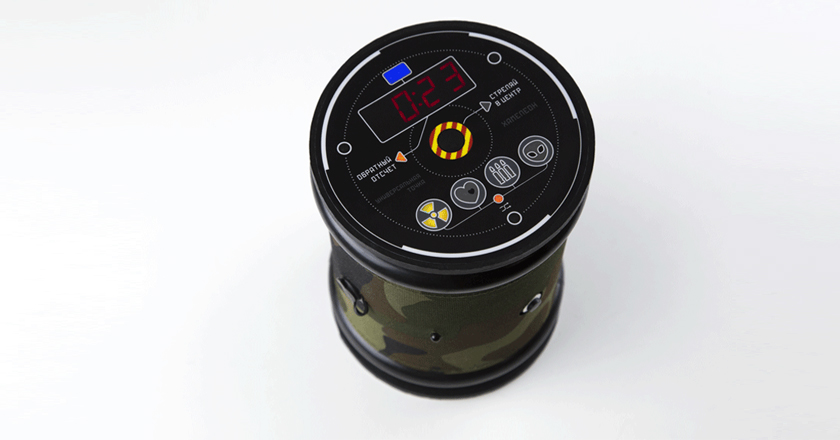 The Chameleon universal point is a next generation device in the LASERWAR production line. It took us over half a year to develop it. We have fully reconsidered the design and the functions of the device. The improved gadget makes a laser tag game yet more interesting and meets high game quality standards. A whole 3 scenarios have been added to a single device. We are sure the device will surpass all the expectations of game organizers, for it takes just a few seconds to set it up and this can be done even on a polygon. Now the universal point supports 4 types of impulses: radiation (deprives players of their lives), treatment (fully restores a player’s health, just as a first aid kit), ammo top-up (restores cartridges), and anomaly (organizers can select any of the 20 teams on the list using a laser tag configurator).

We must do full justice to LASERWAR designers who managed to combine cool look and originality in one device. The body of the Chameleon, made from black impact resistant plastic, is cylinder shaped. At the top, there is a digital display, and signs Ammo, Health, Radiation and Anomaly, 3 infrared LEDs and 1 infrared sensor. There is a rim around most prominent elements, a field for team colour and a bright central zone, indicating the infrared sensor. On the body, there are 3 infrared LEDs, an advance security lock, control button and a charger input. The latter comes with an attached rubber cap. The weight of the device is 620 grams meaning that it is 2 times lighter than the previous version. Powered by a 2.2 Ah li-ion accumulator. The Chameleon will operate non-stop for 36 hours. After the battery has been emptied, it can be charged using any charger of the Li+ range. The powerful piezo sound emitter produces an excellent sound volume. 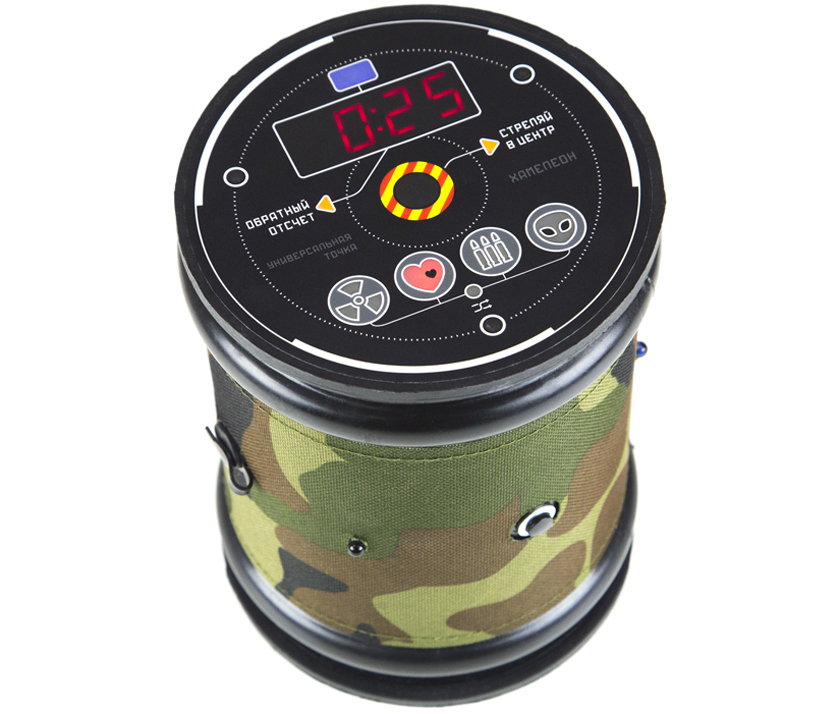 The cylinder shaped body of the Chameleon is placed inside a case made from dark Military fabric. It will match the overall style of the game and will add a special air to the combat. The textile Velcro fastenings make it easy to remove the case in order to wipe it or wash it.

The ergonomics of the device and the clear and simple visualization of its performance are the new features that characterize all LASERWAR additional devices of the Smart range.

Unlike the previous version, the new universal point can boast a variety of functions. Below we have listed the features that proving that it is truly universal. Here we go.

Activate the universal point by turning the key – this will be followed by a sound signal. The number of the scenario will be displayed on the digital screen. Launch the game using the control button or any LASERWAR remote. The pattern of the game will now depend on the scenario that has been chosen in the settings.

As the game begins, the countdown will start on the digital display. When 3 seconds have been left till the end of the game, the device will produce intermittent sound signals. After that, the impulse will be produced. The instructor can also set up a random impulse – in this case, it will only become clear which impulse has been selected 3 seconds before it has to be produced.

At the start of the game, the device belongs to one of the teams. As the game begins, the team sign acquires the relevant colour and the countdown begins. After the selected time interval, a treatment impulse will be produced. When a player from a rival team shoots the device, he takes away the base strength points which equal the power of the shot. After a particular time period, the strength starts getting restored. After it has been fully restored, the base starts sending off treatment impulses again. The base is considered to be destroyed and cannot be restored should it have lost all its strength points.

At the start of the game, the point is neutral. After a player has shot it, the point has been captured by the player’s team and signalizes about this as the team’s sign acquires the relevant colour. There is a short delay after the shot, then the point produces the Radiation impulse and starts treating the players of the team that have captured it. If the point has been in a team’s possession for a particular time interval, the game ends and the point displays the colour of the team that has won.

To set up the universal point, one must enter the admin mode. In order to do this, turn on the device by pushing and holding the control button. Use same button to do all the setup. It has been mentioned above that there are 3 types of scenarios available for players. Each of them has several variable parameters. There is a clear and simple basic principle, that is, you can switch between the parameters right inside the scenario. Select the next parameter by pushing and holding the control button for more than 3 seconds. After a 5 second pause, the device will switch over to editing the scenario number. In 10 seconds, the selected parameters will be saved in the memory of the device and the point will notify about this by producing a short sound signal.

The following parameters can be edited:

“CodE”: impulse type (a sign of a particular type gets illuminated).

“HP”: number of base strength points.

“dHP”: number of strength points added per second at restoration.

The Chameleon can be set up using the LASERWAR laser tag configurator, too. We will provide detailed information on how to do this in the next program update.

The newly updated device will cost laser tag players 4400 roubles. The price is fully justified by the advantages of the device: outstanding design and ergonomics, digital display for capture time and strength of the point, unique visualization of the modes of operation at the top section of the device, 3 editable scenarios in one device, compact dimensions and the indestructible body. Do not deprive yourself of this pleasure to try out the Chameleon in a laser tag game. The item is now available at our LASERWAR online store.