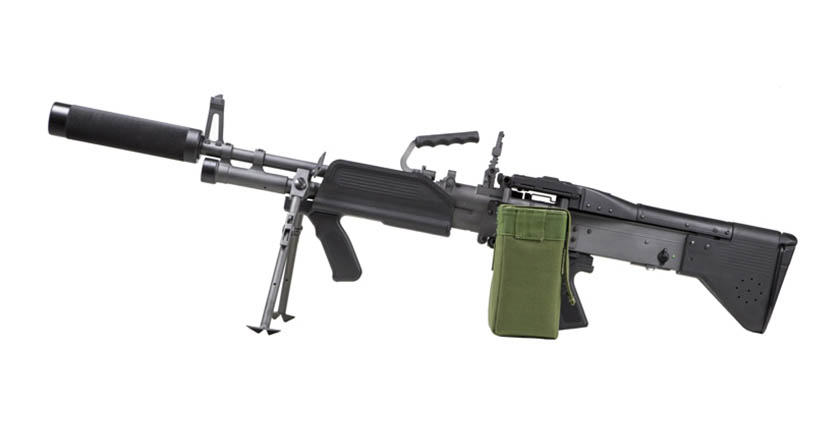 There is a category of laser tag fighters no assault group can do without. They got used to delivering a barrage to protect their team mates advancing on an enemy and carrying this cumbersome piece of firepower on their shoulders. These players will find our today’s news article particularly interesting. That’s right, we are going to talk about machine gunners.

A new robust item from LASERWAR has been added to our arsenal – the laser tag assault machine gun Mk 43 TORNADO of the ORIGINAL edition - and we are going to analyse all the features of this monster in detail.

First, though, here are some history facts. This machine gun evolved from the famous line of the American machine guns M60. At the beginning of the 1990s, at the request of the US special operations command, the Saco Defence company refined M60E3 by introducing lots of changes so as to eliminate all the faults and naming it M60E4. In 1995, this machine gun with a so-called ‘assault’ barrel, shortened and increased diameter, was adopted by the US Marine Corps and the US Navy under the name of Mk43. The machine gun was fitted with a fortified bipod, an improved magazine chamber, more durable barrel as well as a more reliable trigger mechanism. To test the Mk 43 barrel for durability, an experiment was conducted: 850 cartridges were fired within 1 minute 45 seconds interval without any interruptions or failures in the operation of the machine gun.

The play set presented here is based on an airsoft replica of the Mk 43 by A&K. We recommend this model for personal use, same as with the majority of our models that are based on airsoft guns. Thanks to its unique characteristics, it can become a gem of a personal collection or be added to an arsenal of a club for serious games, in which genuineness of a blaster is more important than its being indestructible.

The blaster is very elaborate. Many of the numerous engaging small details of the mechanism do not serve merely for style – they are fully functional. The 6.3 kg weight of the machine gun gives it a realistic touch, offers players a chance to feel like real machine gunners, which also means that they must have a good physical shape.

The weapon has a plastic handguard, handles and stock; the barrel and the receiver are made of aluminium alloys. The removable cartridge box has protective colour fabric over it. On top of the barrel, there is a slide back handle for carrying the machine gun in battles. It can also be carried using a strap pulled through openings in the butt plate and secured with a clasp to an opening near the handguard.

To reload the gun, one needs to push the slide forward and then pull it back to the initial position. It must be noted that the slide must be pulled back manually. 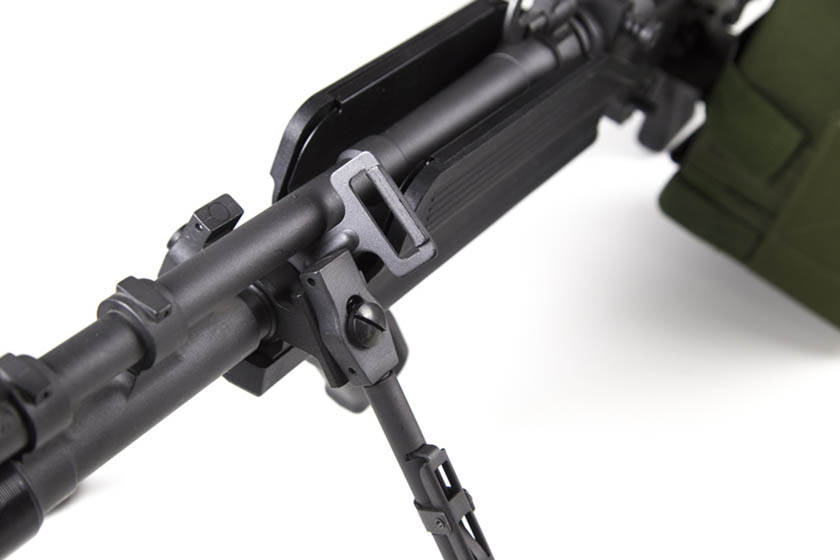 Fitted inside is a lithium-ion accumulator with a capacity of 2.2 Ah. The machine gun will perform continuously for up to 30 hours. The charger inlet and the indication LED are at the left-hand side of the stock. Any chargers of the Li+ range can be used to charge the set. For example, you can use the Spider.

The set is turned on by means of a key, the inlet for which is located at the bottom section of the stock, next to the trigger guard. The speaker is somewhere around there, too. 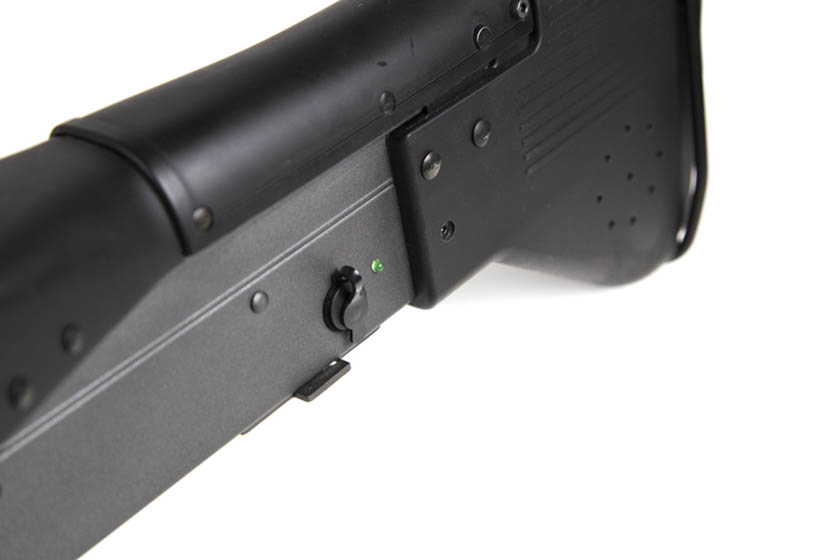 The blaster is fitted with a regular machine gun sight consisting of a high-positioned foresight and a flip-up rear sight. The rear sight has been constructed in a way that enables horizontal adjustment and focusing control using two sight deflection knobs, which provide an accurate aiming point, as well as magnification control by means of a sight bracket.

The foldable telescopic bipods are attached underneath the barrel by means of a pivot joint. By applying pressure to the top section of the bipod you will free the spring lock. After that, the bipods can be set up for use or folded along the handguard. The length of the bipods is adjustable, too.

The machine gun comes fitted with a removable box for keeping a cartridge belt in it. In this particular case, it is nothing more than a way of zooming in on its unique character – there are no cartridges inside of it. Yet one can still find it handy by filling it with small essentials, for instance, a couple of sandwiches – a good idea for a long game). 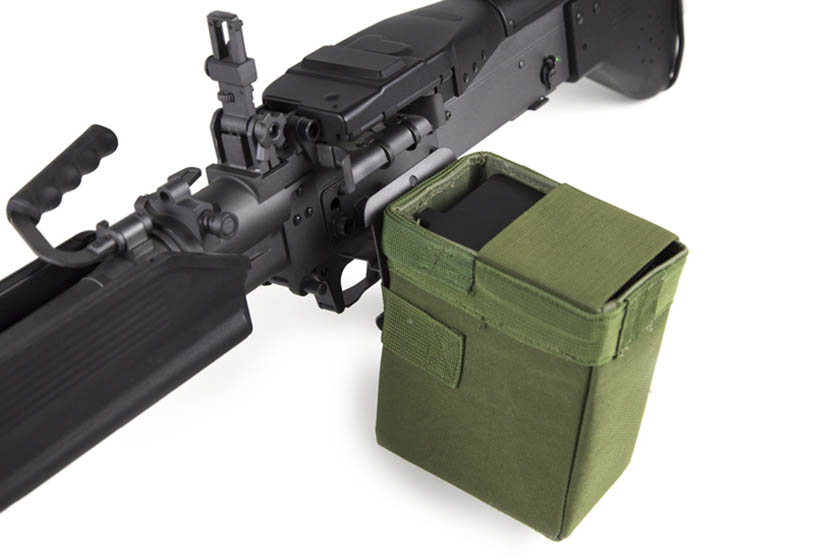 The stock of the machine gun fits comfortably against one’s shoulder. The forward folding shoulder piece will protect it against  sliding off by accident. The pistol grip is comfortable and feels reliable. There is a two-sided safety catch. When the safety catch thumb piece, located above the grip, is turned, the trigger gets blocked.

One can fire the machine gun from a number of positions. For an assault attack during which suppressive fire is applied, there are two pistol grips that allow to hold the weapon relatively easy, considering its weight, while standing, and press it against one’s shoulder. One can also hold is by its plastic handguard. For the ‘lying down’ position, there is a classic shooting variant using bipods. 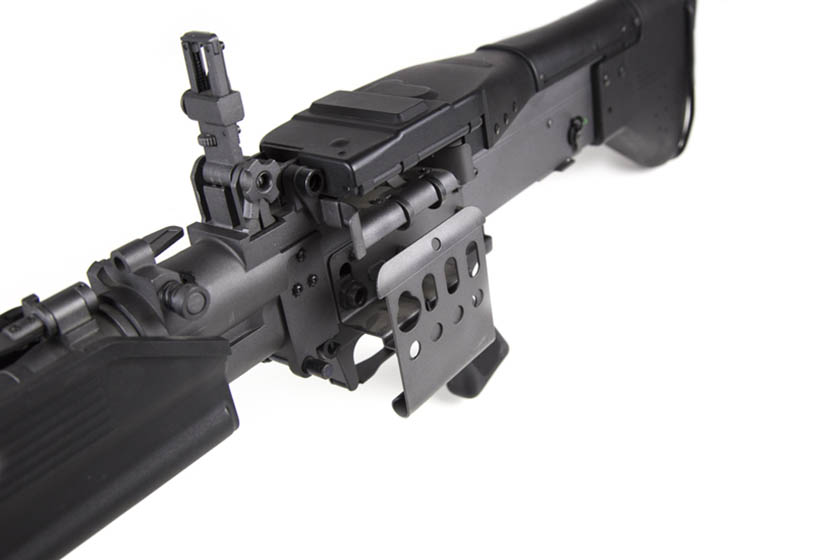 You can buy the Mk 43 TORNADO play set of the ORIGINAL edition right now through our online store for 36 700 roubles.

It will become your firepower and will make your events even more realistic. Wishing you precise fire and good luck at your games! 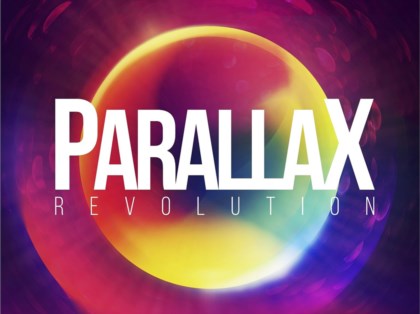