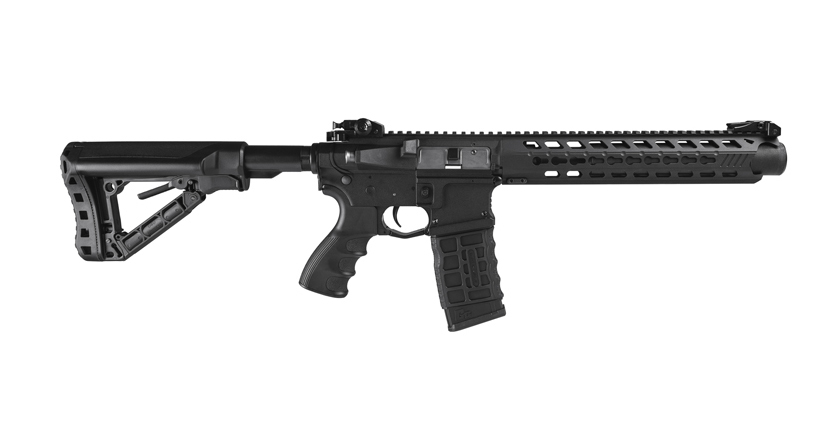 The Colt M4 automatic rifle was developed in the USA on the basis of the M16A2 rifle and was originally intended for arming combat crews and fighting equipment personnel, for which the excessive length of the M16A2 was a hindrance. The carbine has a shortened barrel and a collapsible buttstock, making it even more compact. Despite a slight decrease in the shooting characteristics, the great convenience of using the compact carbine led to the fact that it was adopted as a must-have weapon for all U.S. special operations forces, and now it is used by the U.S. Army.

The first impression - that the future has already come

A strike-ball fantasy on the theme "how M4 will look like in the near future" helped to create this device. The familiar and famous silhouette of the American rifle has suddenly acquired new, slightly fantastic outlines. It seems that it has not changed beyond recognition, but has become much more modern than its prototype. A collapsible buttstock and a futuristic but very functional barrel casing, which replaced the usual plastic foregrip, made the carbine look like in some American fantasy films. Let's take a closer look at it.

The body of the tiger is made of light alloy metals and weapons-grade plastic, which gives it lightness, but, alas, does not guarantee the strength of the real combat iron. We recommend it for personal use, as well as all strikeball replicas.

The plastic fluted magazine houses a loudspeaker for great and clear sound. The indication LED located at the point where the magazine is adjacent to the body is almost invisible when switched off. The 2200 mAh battery is located in the buttstock tube and provides up to 30 hours of continuous play. It can be charged with a Li+ charger. The charging socket is located on the underside of the pistol grip and protected by a rubber plug.

Use the fire mode switch located above the pistol grip to turn on the weapon. You can conveniently reload the bolt with your right or left hand to turn the weapon on.

A special attention should be paid to optics. Realizing that one of the advantages of the carbine is its compactness, we decided to integrate the optical tube into the barrel casing without increasing the size of the tagger. And our integrators have done a great job of that. The assault rifle's optics provide an optimal range of fire up to 185 meters, and its authentic appearance and compact size make it a dream for any assaulter.

The main highlight of this design is the KeyMod foregrip, which gives it a futuristic look and provides ample opportunities to place additional rails and equipment at the side and bottom of the barrel. The upper part of the foregrip and receiver is one large Ris-rail for mounting sights. 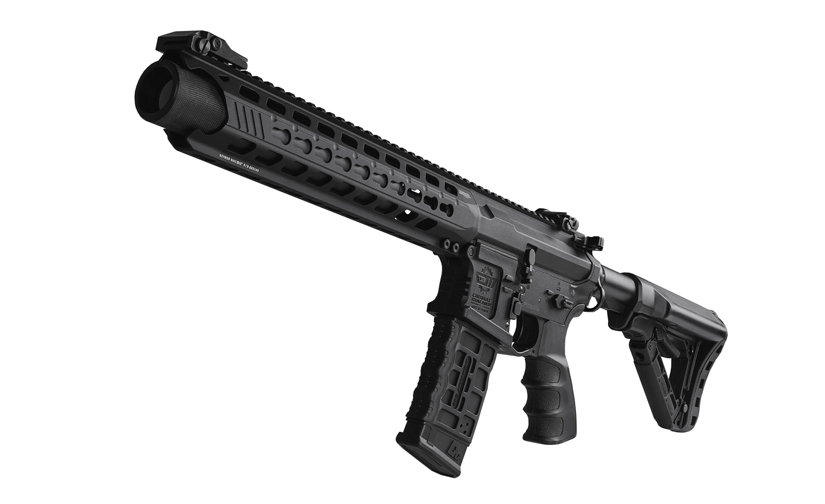 The entire top surface of the KeyMod foregrip and receiver cover is one large Ris-rail for mounting any sighting equipment or target indicator. It also has a standard backsight and foresight. In addition to being detachable (easy to remove from the rail), the standard sights can be quickly folded in so as not to interfere with the additional sights. The folding open foreight is mounted in the front of the barrel casing, and the folding diopter backsight is mounted above the pistol grip. The backsight can be adjusted horizontally and according to the distance.

The sliding Crane Stock is incredibly easy to use. Five fixed positions allow changing its length from 20 to 30 cm, moving the carbine from a compact (shooting while holding the weapon near the stomach) to a full-size position, convenient for thoughtful aiming. The buttstock locking lever operates on the principle of a "swing". Pressing one side of the barrel releases the stock lock and pressing the opposite side locks the stock in a new position.

The upper part of the stock has a double-sided "cheek", which is convenient to use while shooting with both your right and left hand. The comfortable rubber buttstock butt plate fits securely to the shoulder.

One side of the buttstock triangle is a hinged container for storing important small items with a flip-up lid and lock button.

The ergonomic pistol grip, made in the shape of a hand, is very comfortable and fits nicely into the hand. The wide trigger bracket will easily allow you to fire with gloves on.

Above the pistol grip, a double-sided carrying sling clamp is mounted at the base of the buttstock. If necessary, additional belt clamps can be easily mounted on the foregrip. 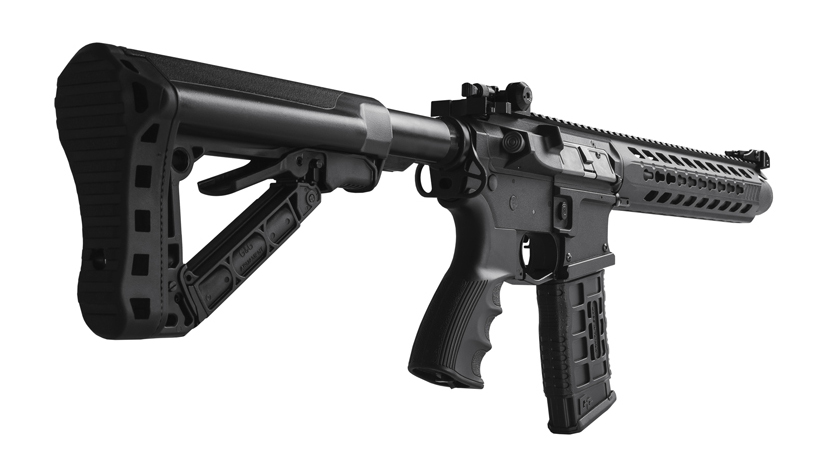 The tagger looks so spectacular and so ergonomic that you will definitely want to try it out in battle. And that can be done easily because M4 Cobra ORIGINAL Edition is already available in our online store and the price of 480 dollars. 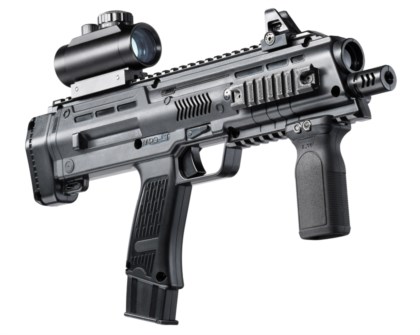