The fact that LASERWAR specialists took up integrating electronics into a replica of a combat weapon means that this model is worthy of it. This time, we are going to talk about a machine gun designed by V. A. Degtyarev (DP). Now, here is more. During the Second World War, the Degtyarev machine gun was the third most popular weapon after the PPSH-41 and the Mosin-Nagant. This is largely due to its technical and tactical characteristics.

Let us introduce you a replica of the combat weapon. It is sure to be admired by laser tag players. 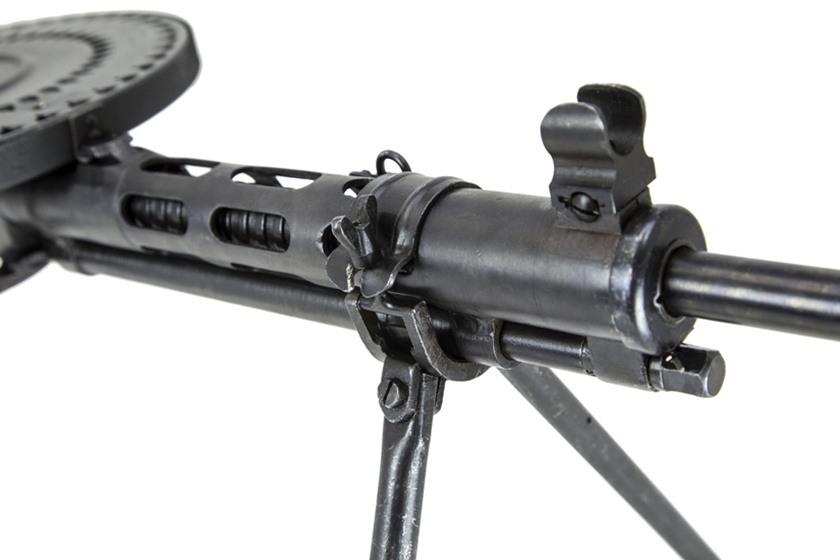 The player that picks this play set needs to be physically strong and tough, for the weight of the DP DEGTYAREV is over 10 kilograms. Yet the chief objective of a machine gunner is the fire support of the advancing assault group. Therefore, you must select high firing rate, shooting range distance and full magazine in the settings. All this will help him to achieve the combat goal. All in all, the model is easy to use, the bipods are comfortable for aiming, the machine gun barrel provides the effective firing range of more than 250 metres. We doubt not that laser tag fighters will admire the DP DEGTYAREV for its authenticity and combat power.

The body of the dummy of the combat weapon is made of gun steel, except for the stock, which is wooden. The lithium-ion accumulator with a capacity of 2.2 Ah provides up to 30 hours of continuous operation of the machine gun. The charger inlet is under the gun receiver (it is where the magazine is attached). To charge the play set, use any charging devices of the Li+ range, such as a Spider charger.

To turn on the device, use the buttplate takedown pin located on the right-hand side of the receiver. The gadget comes with breechblock reload. The speaker is in its usual place – the flat disk-shaped pan magazine of the blaster, which ensures higher sound intensity and volume. 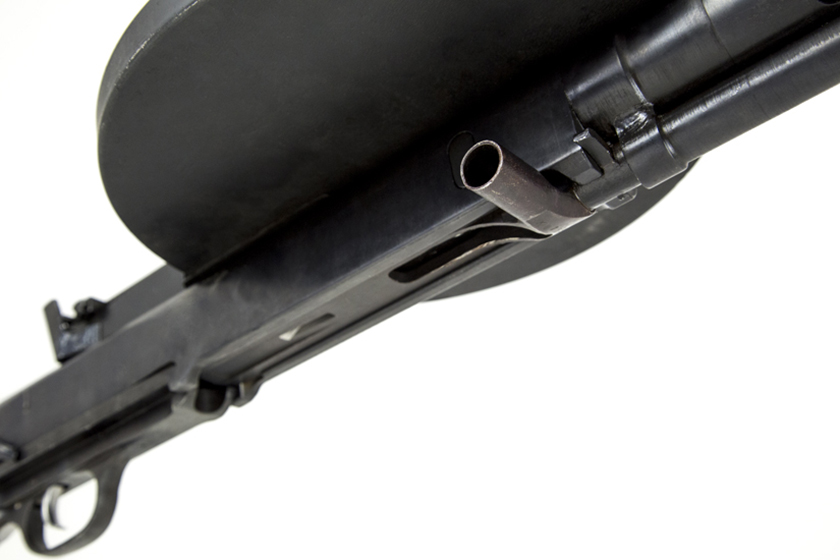 The machine gun is fitted with a tangent sight with a high ramp which is fixed on top of the receiver. Sight adjustment has been made easy due to the sight rail which can be used to select a range of up to 1500 metres (with a 100 m pitch). The foresight is on the protective “ears”. It was fixed into the groove on the receiver jacket. The magazine latch is also used as protective “ears” for the sight.

The bipod is attached to the receiver jacket using a metal slide and is easy to fold. In order to do this, push the bipod legs up to the barrel and fold them up together. They can be easily removed for transportation. To do this, unscrew just one bolt. 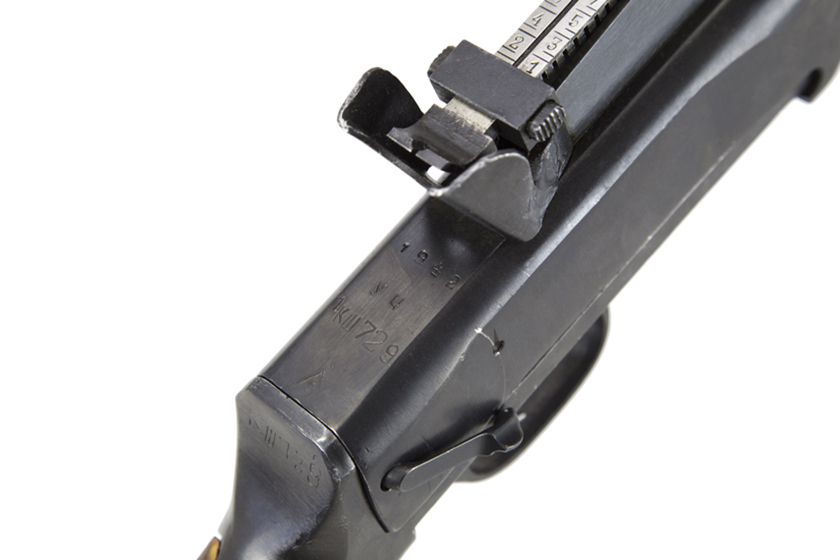 The wooden stock is same as that of the Madsen machine gun. It has a pistol type small of the stock; the gunstock comb makes aiming more comfortable. The length of the stock from the trigger to the buttpad is 36 cm. The stock is 4 cm wide. We would like to draw your attention to the fact that the gun comes with the original gun oiling brush which was used for oiling all the moving mechanisms of the weapon. On the receiver jacket and on the left-hand side of the stock, there are sling swivels. 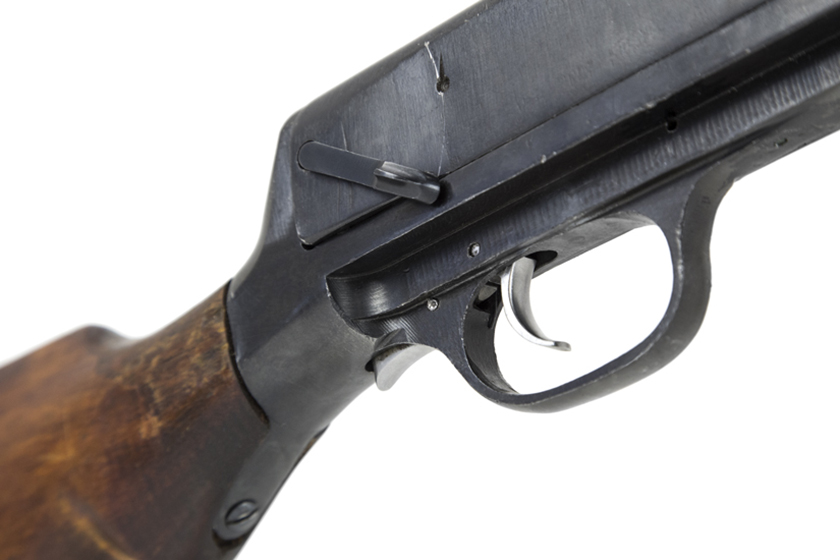 This play set has a peculiar trigger mechanism. In order to fire a shot, as you pull the trigger pull and hold a small tongue (automatic safety catch) located behind the trigger guard. 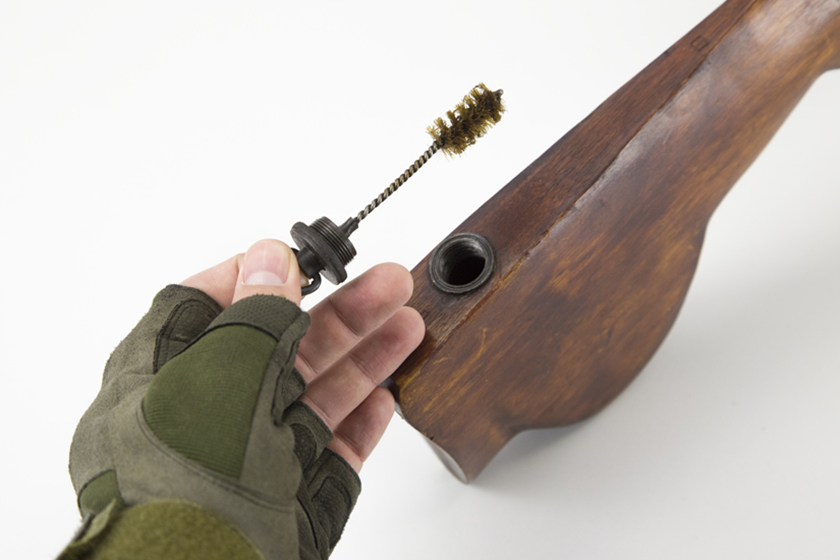 When firing any laser tag set of the STEEL edition, one feels as though firing real combat weapon. What can be better than this feeling of a realistic combat fight? The price fully justifies this. The play set is 52 930 roubles. Do not deny yourself this pleasure. The item is now available at our online store.