"Just look at these kids! They don't have anything that could interest them. All day long they sit in front of their phones and desktops!" Sounds familiar, right? We constantly hear similar complaints about the younger generation. Here it is, the conflict of the 21st century generations: adults who grew up without mobile phones and laptops condemn those who were born in an era of booming technology and start using gadgets before they learn how to read.

LASERWAR disagrees with that approach. The situation isn't as sad as some people think. First of all, today's kids are already difficult to surprise with a smartphone or a tablet. Everybody has them. Those gadgets have long been a regular part of everyday life. Far from being its main part. Secondly, many teenagers today are looking for an opportunity to realize themselves through hobby, sports and creativity. And the task of adults is not to waste time on endless criticism, but to support their kids, giving them the opportunity to spend time actively and usefully. Laser tag is the best choice for that purpose. It's called the sport of the future not by chance. It's a combination of high technology, safety and sports that make this game really exciting.

Laser tag has long since ceased to be just a kids' game, but it still has plenty of pluses for little restless persons. These are the main ones.

Playing laser tag can be a great alternative to your usual leisure time. If current movies are of no interest, and you do not want to sit at home – come to the laser tag club. This option will also help if you ar tired of the holidays in kids' cafes and entertainment centers. Adults will not have to puzzle over the scenario of the celebration, and kids will enjoy a lot of running and have a great time. Just what you need for a noisy company.

Laser tag will please even kids who prefer computer games to all other entertainment activities. You can complete missions and fight the enemy in the real world. The little gamer will quickly realize that such a game has many advantages. Say good-bye to the mouse and joystick – the kid will be given an advanced laser weapon. He will need to aim and shoot at real opponents, come up with a strategy to win and work in a team. Playing laser tag will require a lot of energy from your kid – ideal for a little homebody.

Game sets for laser tag are unique high-tech equipment. They look like real weapons, but at the same time they shoot laser beams harmless to humans. The realistic models retain the weight and dimensions of the originals. Plastic taggers are usually lighter, but just as impressive in design. Which kid would refuse to hold such advanced technology, let alone play with it?

The variety of laser tag game sets is impressive. The LASERWAR product range includes pistols, submachine guns, sniper rifles and even historical weapons, which many saw only in the museum. All kinds of devices allow you to create really interesting missions. Mines, bombs, grenades, medical kits, knives help to come up with original scenarios close to the real combat tasks of military units. This is not a mock battle for kids with sticks instead of pistols. You kids will remember laser tag, be sure of that.

In other military-tactical games, such as paintball and airsoft, hits are often accompanied by painful sensations. In both games, there is a damage agent: airsoft uses rubber balls, paintball – paint balls that break when hit target. It is realistic, but dangerous at the same time. For example, if a ball hits the eye, the resulting injury may lead to serious consequences including loss of sight. Therefore, players are forced to dress up in special uniform. It's very comfortable for running, especially in hot weather.

Laser tag lovers are don't have such problems. Players simply have nothing to defend themselves against – laser tag game sets shoot harmless laser beams. The hit is captured by the electronics. No pain, no bruising, no discomfort – just positive emotions.

The electronics of laser tag game sets provide another advantage. You can't fool electronics, so during the game the "I wasn't hit" arguments are of no use.

Laser tag is good because you can play it almost everywhere. A forest glade, city park, stadium, playground – the main thing is to have enough space.

The game sets withstand heat and cold, so laser battles can be conducted outdoors even in winter. Defend the snow fortress with laser guns – it's something new in the usual winter fun activities, right?

All that allows laser tag clubs to organize away-matches using their equipment. You can have a celebration for your kids wherever you want. Experienced instructors will bring laser tag game sets and explain how to use them.

What should be the ideal kids' laser tag game set? It should look realistic, but be lightweight, compact and durable.

Based on the experience of numerous clients, owners of laser tag clubs, LASERWAR has developed unique laser tag game sets, which are perfectly suitable for both small players and adults. AK-12LT Predator PRO and MP9-LT Phoenix taggers have already become classics of laser tag. They are bought for personal use and rental clubs. Ergonomics and ease of use make those taggers a perfect choice for competitions regardless of the player's age. Those models perfectly proved themselves in battle – they can withstand both friendly battles at family celebrations, and game marathons in rental conditions.

For older kids and teenagers, LASERWAR submachine guns are a great solution. For example, the laser tag game set UZI STING is made on the basis of Gletcher UZM air pistol. It is almost entirely made of metal and weighs only 1.86 kg. The tagger is as similar to a real weapon as possible and is equipped with a powerful sound speaker. Your kid will love this authentic laser tag set!

One more option from the family of submachine guns – МР-5 WOLF. The game set is based on an airsoft model. It is made of steel and impact-resistant plastic. An impressive tagger weighing only 1.86 kg.

The LASERWAR product range also includes high-quality laser tag pistols. The GLOCK game set – a great example, which will be appreciated by both a small player and an adult fan of laser tag. The body is made of a metal alloy with some aluminium. It's durable and lightweight – only 605 grams. The GLOCK has no safety catch and operates on the "grab and shoot" principle – nothing can be easier.

Our laser tag game sets are distinguished by their affordable price, so they are often purchased as a gift for kids. An original solution if you want to surprise and delight the kid. You can also join the game and have a great time together. Buy a laser tag game set or go to a rental club with the kid is your choice. LASERWAR equipment will guarantee a good entertainment activity.

A word or two more about safety

We have already talked about the fact that laser tag is the perfect game for kids in terms of safety. The equipment is really harmless. However, there are organizational issues that require special attention from adults – so that kids could play for fun and moms and dads could forget worrying for their health.

The game of laser tag for kids must be held under the strict control of experienced instructors. Before the start of the round, all players must be coached. The organizers announce the line up, tell about the rules of the game, demonstrate how the equipment works, repeat the rules. It's just like gymnastics at school. Practice shows that this way of communicating information to kids is the most effective one.

No special equipment is required to play laser tag. But the clothes should be comfortable, best of all sporty, without unnecessary straps, buttons and other details that can be caught on something. Besides, jeans make it uncomfortable to run and squat. Wear comfortable sneakers.

It is important to remember that playing laser tag involves a serious physical activity. If the kid has health issues, is exempt from physical exercise, it is worth consulting a doctor before visiting the laser tag club. If laser tag is not a suitable entertainment for the kid, it is best to learn about it before the he starts the game. There's no need to risk the kid's health at all.

To conclude our review, let's talk about scenarios for laser battles. In laser tag there are many interesting game scenarios. Experienced game organizers know which ones are most suitable for kids.

The smallest players are offered the simplest possible scenarios with clear goal setting.

The hit of among laser tag scenarios for kids – the control point scenario. It will be especially appealing to young gamers, because it owes its appearance to the popular computer game Battlefield. The task of each team is to capture and hold the control points for as long as possible, keeping the opponents from intercepting the initiative. A team that has conquered more control points during the battle wins. 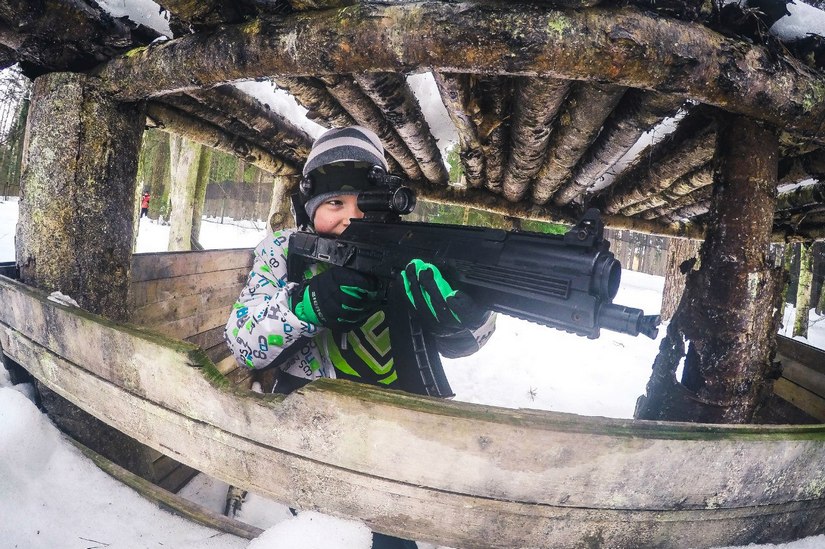 Young laser tag players will surely like scenarios in which you need to plant or clear up a bomb. Everything is pretty simple: one team must put the device into action, the second team must prevent the opponent from implementing the plan. If the "terrorists" managed to plant a bomb, the "bomb squad" needs to clear it up with a special code.

Another classic scenario is Team Deathmatch or, more simply, Wall on Wall. Two teams are in the game. The task of each of them – to survive and eliminate all the enemies.

Let's summarize things we have learnt. Laser tag is ideal for kids by all criteria. This game will please them with cool modern equipment and an interesting scenario. The players won't get bored. At the playground, young fighters can splash out energy without the risk of injury or bruising. The game develops precision, attentiveness and endurance. Game scenarios will teach the kids to act in a team and achieve the goal.

Invite your kid to play laser tag! And make sure you join him on the playground. Laser tag brings together kids and parents, men and women, representatives of different professions. That's why we like it.