All players want to make games as cool as possible. At the same time they would like the equipment to be as realistic as possible. Just imagine you are a soldier. You have a heavy weapon, you hear weapon sounds, enjoy the excitement of this attack, the bitterness of the defeat gives you new emotions.These very emotions force you to play again and again. Others want many elements of fantasy worlds to be part of our real life. But we all need additional equipment to improve standard laser tag scenarios and create the most fantastic gaming moments.
The range of equipment for laser tag produced by our company will impress any pro. Laserwar offers a lot of additional devices that can meet the demands of laser tag professionals. How can I decide what kind for equipment is for me? What devices should the club order right now to make the player enjoy the game?
We provide a good solution. Here we have three most popular devices of this Summer that have been approved by all LASERWAR players.

In any game situation, a grenade can be a powerful device, that can decide the outcome of the battle. Just one good throw – and you can see a powerful enemy at your knees. The opponent doesn't have a chance against the IR pulse!

LASERWAR offers a Trinity grenade for both rental clubs and individual players. It is one of the most popular devices of Summer 2017. What made it so popular? First of all, players need it in many game scenarios. Besides, it's an amazingly realistic device. Due to its dimensions, it's very comfortable to hold the weapon in your hands. Its weight excludes serious injuries during a bad throw, but the weapon is not as light as a feather.

Speaking of throws: The security regulations do not allow haphazard throwing at a recreation ground unless you have decided to hit the enemy directly in the head. Roll the grenade with an underhanded motion. The trajectory of the throw should be parallel to the ground – it will help you to avoid injuries and prolong the life of the device.
The molded frame of the device is made of ABS plastic (black color). The device looks very stylish and realistic. The pulsating led and sound indication calculates the remaining time before the blast. By the way, the time is like in a real grenade – 4 seconds. Press the lever to activate the device. When it is released, the countdown time starts. The lever is protected from accidental pressing with a safety pin and ring.

In White Sun of the Desert, a very famous Russian film, one of the caracters says: "His grenades are of a wrong caliber". Don't worry. Our grenades are of the "right" caliber. The list of user-selected modes includes three types of blasting impulses:
In addition, you can change the grenade settings and install your own delay time. It can be changed from 0 to 10 minutes. 15 minutes after the blast, the grenade will make sounds so that its owner could find the device.

Press the trigger ten times to activate the grenade programming mode. You don't need additional equipment to set up parameters.

ААА batteries are the heart of the device. The battery compartment has been reinforced to withstand damage. The batteries give up to 14 days of great performance. 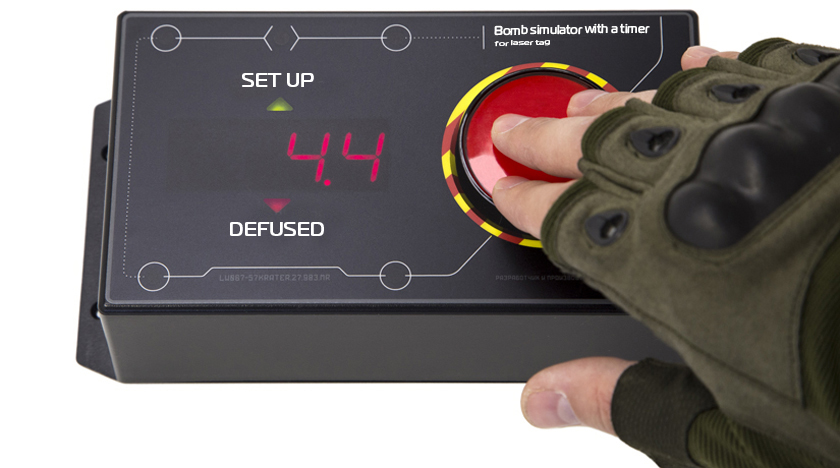 An explosive device can be a perl of any scenario. You can start a sabotage attack having destroyed your opponent's military installation. Also you can deactivate a bomb planted by terrorists – players will like new scenarios as well as club owners.

This device will replace an old "LASERWAR Bomb". This is a fundamentally new device that will provide a fair play at a hardware level..

Now only virtually alive players can activate/deactivate the bomb. To perform those actions you need not only to hold down the button for some seconds, but to confirm you action by shooting from a weapon. Besides that, the device now can identify the player and give him points for planting or deactivating the bomb.

The appearance of the device has also been affected. The device has a new cool design. The players will like the black frame with a large red button and a digital countdown indicator. Planting and deactivation are so simple. Even children can do that.

The device frame has fasteners. You can easily mount it on the wall, even on the ceiling. Use a special key to turn on the weapon. Game settings are modified using the manual programming mode or Configurator.

The built-in lithium battery provides up to 36 hours of operating time. The device can be recharged using any charger from the Li+ series. 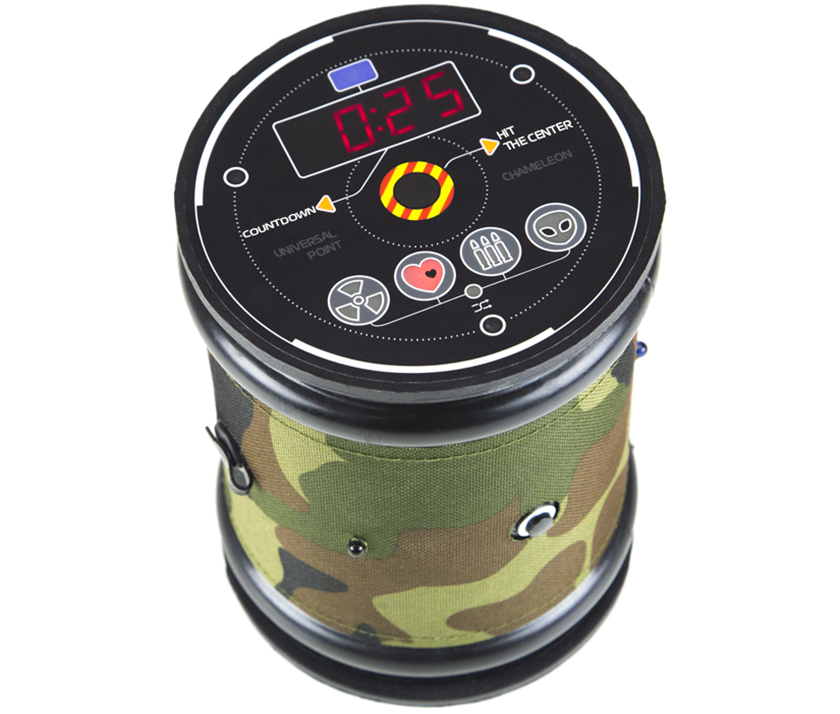 Universal device lovers will like this gadget at first sight. With the help of this device you can play different scenarios. You can change the device settings and functions right on the playground. No additional devices are needed. The universal point supports 4 types of emitted impulses: Radiation (takes health points from players), medic (rosters health points as if the device were a first-aid kit), ammo (gives you ammunition) and anomaly (the game master can select any of 20 teams using Lasertag Configutaror).

The device can bring to the game an element of surprise. There is a mode where impulses are generated randomly. The losers can become the winners at once.

The great design of Chameleon is combined with an intuitive and user-friendly interface. A bright, intuitive mode indication will make your game more easier and comfortable. You will look more stylish with an easy removable "military style" case. It will protect the device from mud. The plastic frame will prolong the device operating time.

You can set the device parameters either manually or by using the Configurator program.

The built-in batteries give up to 36 hours of great performance. You can charge Chameleon with the help of any device from Li+ series.

* * *
All the described game set should be available for players in laser tag clubs. They will diversify the game, help you to create new interesting scenarios and attract more players to your club. The game sets have been approved by many laser tag players who put a lot of trust in Laserwar Company. Have a good game!

Laser tag is no longer associated with primitive shooting afield. Today, it has developed into a serious game stream of military sports. It allows to hold competitions which involve setting goals and solving various strategic tasks. Modern laser tag can’t be imagined without a set of additional equipment which brings variety into the game process. How to make the right choice? What to choose from the rich LASERWAR arsenal? What is surely to be found in any Laser tag club? Read our announcement and you will get the answers

Laser tag is a relatively new game. Not everyone knows about its existence, so to speak of all the subtleties. 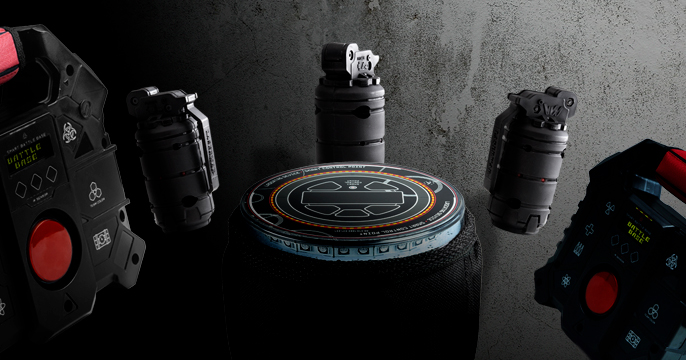