How to build wealth: 5 principles by Andrew Carnegie 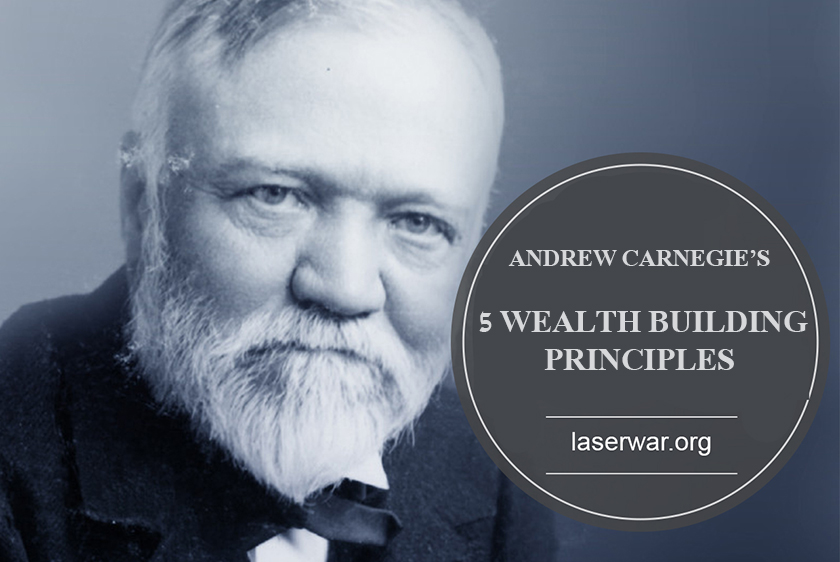 Thanks to his contributions to the advancement of science, astrophysics, biology and engineering, Andrew Carnegie earned the name ‘a businessman of the future’. Dozens of public organizations and charitable trusts have been named after him. He funded the construction of the Peace Palace, an international law administrative building in the Hague, the Carnegie Hall in New York, where Pyotr Ilyich Tchaikovsky performed on Opening Night.

The grants of the steel tycoon were used for the scientific studies of Sigmund Freud, astrophysicists’ scientific researches resulting in a discovery that our Universe is expanding, the study of biologists of DNA structure, while engineers created the radar.

New planets of the Solar System were discovered in the California observatory that had been built using the money from his fund.

People frequently asked Andrew Carnegie for advice on how to build wealth. Here’s what he suggested:

1. ‘Never buy anything you cannot pay for, never sell anything that does not belong to you’

Carnegie admitted that he had never made speculative investments. He never bought anything he wouldn’t be able to pay for, nor did he sell things that did not belong to him. ‘Just at the start of my career, I had a few stocks. Later, I made up my mind to sell all other companies’ shares and focus on our own companies instead.’ – wrote Carnegie.

2. ‘Do not stand surety for another person’

‘No other thing can pose greater danger to businesspersons than standing surety for another person’.

You can avoid this by trying to answer two questions: ‘Will I have enough money to pay off all the sum I took legal responsibility for?’ and ‘Am I ready to lose this amount for the person I stand surety for?’ If you answered ‘Yes’ to both these questions, do the favour to your friend. Yet it might be a better idea to give him the amount he needs in cash than act as a surety for him.

3. ‘If you have any disagreements with your subordinates, play a waiting game’

When Carnegie had disagreements with his employees, he played a waiting game and negotiated with them in an amicable manner as he tried to put across to them that their requirements were not adequate. He never tried to replace the rioting workers with new ones. ‘I achieved my aims not by direct attack – I did it by adopting a stratagem.’

4. ‘ Search for people who know what needs to be done better than you do’

When I asked myself: ‘How do I build wealth?’, I knew that having an executive talent was a must for succeeding and that my success depended greatly on whether I would be able to develop it in myself’, Carnegie wrote. ‘I achieved the success mainly thanks to my ability to find people who were better aware of what had to be done than myself, rather than owing to my own knowledge and ability.’

5. ‘Always take part in negotiations when important agreements need to be signed’

Carnegie often repeated that the most important decisions hinged on small things. Trifle things frequently bring about grand consequences. So, considering something to be insignificant is too bold. A person that wants to secure an order must be at the right place at the right time. Whenever possible, don’t leave that right place earlier than the job is done or earlier than you can put the signed agreement in your pocket.

‘There is a way to make someone do what you need. There is just one way. You need to make that person want to do that. Remember – there are no other ways.’

Carnegie Steel Company is one of the biggest steel producing corporations in the world. The company built the first in the USA steel mill that adopted the Bessemer industrial process which allowed to lower the prime cost of production of 1 tonne of steel from $100 (during the early 1870s) to $12 (during the late 1890s). During the 1890s the Siemens-Martin process was adopted at Carnegie’s plants for the first time in the USA. As a result, the USA outstripped the UK by the volume of steel production and became top steel producer.