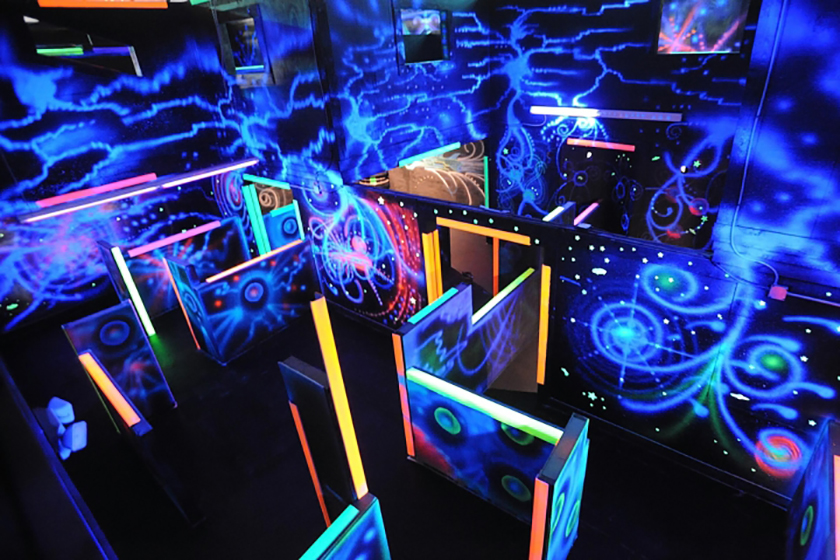 If you like to make the most of your time off, then you must have played a game of laser tag at least once. It is ranked high among other tactical games and is gradually becoming the most popular type of entertainment among recreational activities fans of all ages.

A division of modern laser tag into two types has been widely accepted: indoor and outdoor. They follow same principles, but have different essence: the first one in held inside a building, while the second is played in an open area. In Russia, outdoor laser tag has so far been more popular just because it’s a money saving option for the majority of owners of laser tag rental clubs: when a game is held in a field, a forest or inside an abandoned building there is no rental fee to pay.

Things are quite different with indoor laser tag. It must be held inside a specially equipped labyrinth. One needs to rent a place and have it repaired, think over the design and special effects, build hideouts.

Yet indoor laser tag has a number of notable advantages, which make it particularly attractive for potential players. Besides, the number of laser tag labyrinths in the country is about to significantly increase soon, because right now one of the largest producers of game equipment is at the moment developing weapons and ammunition specially for indoor laser tag! But more about it a bit later.

So, let’s think of all the advantages of laser tag

Laser tag rules are very straightforward: you must hit a rival by firing your blaster. Just before the start of a game, all participants are given out vests and weapons with sensors that catch infrared ray hits. The information about successful hits is registered by a computer, meaning that deceit on the part of the participants is ruled out. Normally, the team that neutralizes more rivals or captures the enemies’ base and keeps own one wins. At the end of the game, the awarded points are counted and the team that scores highest wins. Yet speed and precision in laser tag are not of the utmost importance. The ability to perform a tactic analysis is a lot more valuable. The more united the team and the better thought out the strategy the higher the chances for a victory are. 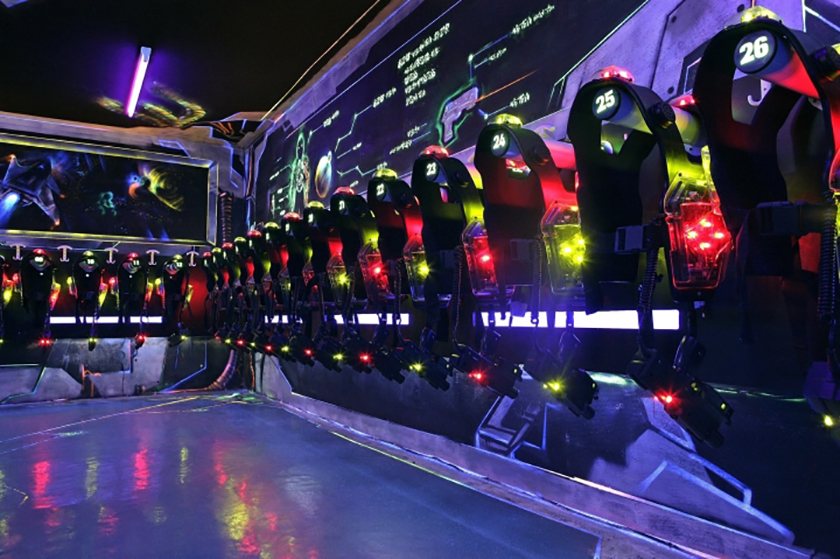 Indoor laser tag is akin to a computer game in many respects. These days, you can hardly find a person who doesn’t like to play shooting games from time to time. Just imagine that you suddenly turned out in a virtual reality. The majority of labyrinths have been constructed in such a way that completely surround a player with the atmosphere of his favourite computer shooting game or a fantastic movie. The illusion is created by special sound and light effects, specific atmosphere and certainly by the scenario. A few words about scenarios. Many of them are based on popular games or films. For example, you can get into a ‘Star Wars’ labyrinth (and play on the side of the Republic supporters) or a ‘Mass Effect’ one (and convert to a Lieutenant Commander Shepard). Labyrinths are not only designed accordingly – they are equipped with additional devices: IGBs (interactive game bases), also known as game bases, and special interactive targets.

Indoor laser tag is very spectacular and active. Vests and weapons glow the colour of the team (red or green), so that players could tell apart friends from rivals in the dark, as well as for safety reasons: no one fancies receiving a blow on one’s forehead. Tagers (blasters) often have transparent casings. The LEDs that are fitted inside of them create bright illumination, thus maintaining futuristic and fantastic style of a game. Sound effects and vibro indication deserve special attention. The modern equipment imitates not only shooting and hit sounds, but even the whizz of a bullet flying by!

Indoor laser tag players have more lives and cartridges, their weapons are programmed for mid firing ranges, while health regeneration time after injury is a lot shorter. This makes a game more dynamic. In order to not get caught in crossfire or not get trapped, a ‘soldier’ must stay very alert, especially considering the low visibility conditions inside a labyrinth. The ability to make quick decisions in extreme conditions often determines the outcome of a battle. Naturally, one will find it impossible to carry around heavy and bulky weapons with him. For this reason, tagers for indoor laser tag are light and compact: they will hardly help you build muscles, but you are sure to shed extra kilos.

Indoor equipment is fitted with a significantly higher number of defeat areas than is the outdoor variety (where sensors are only in the headband). There can be up to 7 defeat areas on a vest and on a blaster – when hit by an infrared ray, they light up the colour of the rival team. This way, a player may receive a ‘safe’ infrared ‘bullet’ in his abdomen, back or shoulders, making him move more actively, jump up, dodge and crouch. This looks really funny, kids are sure to enjoy.

Indoor laser tag is suitable for small groups: there can be up to 6 ‘soldiers’ in each team. Therefore, it is very convenient for a small group of friends or for a family. It does not matter what the participants’ physique, sex or age is. By the way, it’s no surprise why kids and teens are nuts about laser tag: they have so much energy that needs to be channelled into something peaceful; they are so daring, they easily get absorbed in the fantastic atmosphere of the game; they love feeling like heroes. 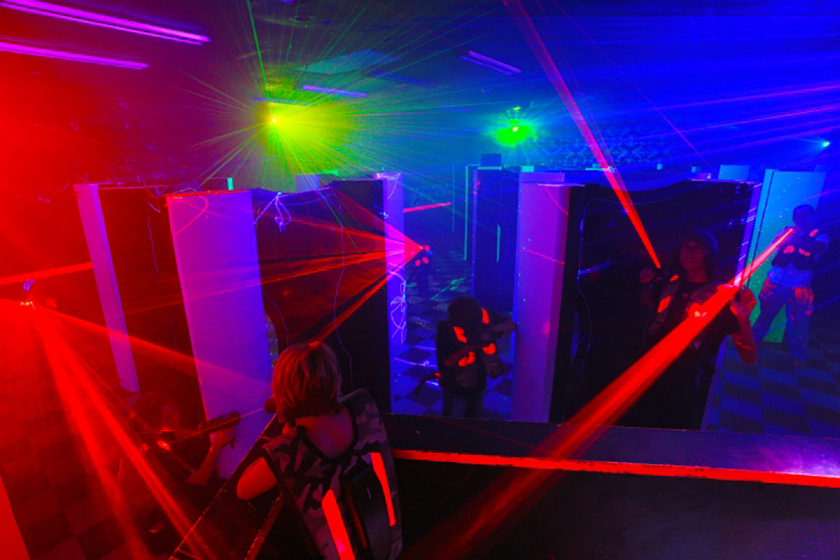 Arenas are frequently opened inside shopping centres. This is very sensible and convenient: people coming there to do their shopping can perk up their duties by adding enjoyment to them – go shopping and have fun. Cinemas and slot machines have long become commonplace, 6-year olds are extremely bored on children’s playgrounds. At the same time, laser tag helps chill out after a tiring shopping spree.

By the way, indoor laser tag, besides everything else, is a great means of preserving peace and understanding within a family. While wives are selecting outfits, husbands grab the kids and go to play. This is a win-win situation: women can take their time, while men stay out of their way and don’t keep checking the time, all their looks implying that it is time to wrap it up. Thought, as surprising as it may seem, mums are even more daring during a game than dads and children. So, there are great doubts as to who will need to be dragged out of the labyrinth.

There is another significant advantage of laser tag: you can wear the clothes in which you came to the game and not fear injuries. In laser tag, infrared rays are used for shooting, not balls of paint as, for example, in paintball. Therefore, you won’t get messed up. Premises for indoor laser tag are safe: they have even floors, spotlit corners, sometimes even covered with soft padded material. This is a fast-paced game and the participants will have to run if they want to win. Nevertheless, running around a labyrinth too fast is forbidden for one can incidentally collide with a rival (or an ally). Seeing stars is a great special effect, yet painful. Anyway, there haven’t been any serious problems so far. Same cannot be said about other military sports games.

Last but not least, another advantage indoor laser tag: it can be enjoyed at any weather, all year round! It is always warm and dry inside the place, you will not step in a puddle, stumble over a hummock or lose face, for there is no dirt in a labyrinth. You will get loads of new positive experiences. Not least thanks to the special atmosphere: visible laser rays, glowing vests and blasters, fluorescent light, theme music and design – this all is very impressive and will make you come back to the arena again and again.

Everyone who one way or another has to deal with laser tag has heard about the most determined and creative developer in this field. The point at issue is about LLC Laserwar and their brand name LASERWAR. This company not only became the leading producer (by the way, within a very limited time period) of weapons and equipment for laser tag, but also united over 600 Russian clubs. One can hardly find laser tag game amateurs and professionals who haven’t used equipment with LASERWAR logotype on it. Social media rumours have it that the company is about to create from a scratch country’s best equipment for indoor laser tag: it will combine in itself all the advantages of the already existing technologies and quality and comfort the way it is seen nowadays.

Company representatives haven’t given any comments so far, but they’ve affirmed that the tagers and the equipment will cost a lot less than their foreign analogues, yet will be superior in quality! What does this mean for us, the players? This means that indoor laser tag may at last get more popular than its outdoor variety and labyrinths will be opened in every place. Certainly, everyone will benefit from this. As for now, let’s wait for the news that will appear on the producer’s website any time soon.