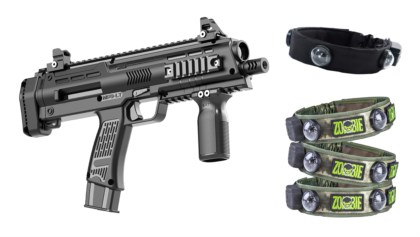 A set for fans of blockbusters from the category of "Dawn of the Dead" and "Resident Evil". Ideal for quests involving "monsters". Add makeup and costumes to the actors and get spectacular entertainment.

MP9-LT PHOENIX is a lightweight, compact and very durable tagger. LASERWAR's bestseller! It incorporates features of timeless classics - developed from the MP9 submachine gun and the TMP automatic pistol.

Ideal for both kids and adults. The ergonomic design includes a plastic body, tactical grips and four Picatinny rails for additional equipment. The body is made of durable polycarbonate and can withstand all kinds of stress. The optimum range is up to 250 m. The tagger is equipped with a Feedback simulation function and comes with a bright OLED display. Easy to use: turn on with a key, reload with a button.

The Zombie device is similar to the popular Hostage game set from LASERWAR and represents a headband with hit sensors. Bright LEDs, multizonality, background glow - all these advantages are also available in "Zombie". It is completely autonomous and self-sufficient. A zombie player doesn't need a tagger!

The headband sensors emit hitting pulses at intervals of 2-3 s. The blast radius is up to 5 meters. Everyone who gets hit takes damage. The more damage from the Zombie, the faster the player dies.

When fighters hit the device from their taggers, the Zombie begins to "give back" the received damage. You will immediately find out who has that bandage on the playground. Zombie sensors always glow bright green.

The device is activated by means of any remote control or the First aid kit from LASERWAR. Zombie works with 8, 9, 10 and 11th generation of laser tag equipment.

Laser tag lovers will appreciate the variety of scenarios that will be available with this device. So, it will allow you to present in a new way the familiar scenarios of "the capture of the control point", Team Deathmatch and "Storm".