How to win in laser tag? Practical tips 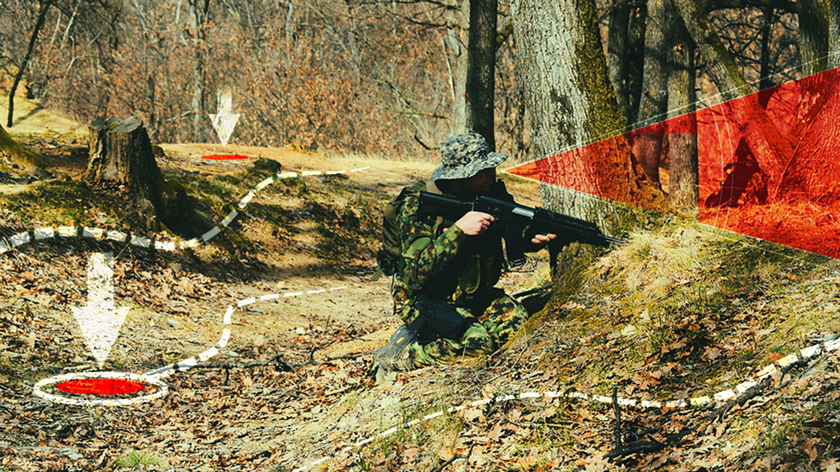 Not for nothing laser tag is called a military tactical game. It has its own rules and tricks. To succeed, it is important not only to know, but also to apply them in practice. Today we will talk about how to play laser tag to win.

1. The main mistake of all newcomers to laser tag is to unite in a group and move around the playground as if they were a "mighty hoard". It is clear that an inexperienced player subconsciously wants to stay close to a team mate, but in this case the whole team becomes an easy target. So, the first and main tip is to spread out.

2. Remember, you are a part of the team, so you act with the general interests in mind, unless the scenario provides otherwise.

3. Do not stay in one place, or the opponent will quickly detect and hit you. Laser tag is a constant movement.

4. Change your position, keep firing at your opponents. Movie in short bursts from one shelter to another.

5. Do not panic when you see the enemy. Act calmly, but quickly. Do not be afraid to open fire immediately, but do not shoot at random, try to aim first. Important: the closer the enemy, the narrower the IR beam of the tagger. So, aim more carefully near the target.

6. Use the specifics of the terrain to your advantage. Set up ambushes, move from obstacle to obstacle to make hitting you a difficult task.

7. Play actively. You can't win by sitting in a shelter.

8. Be mindful and make sure not to place the sensors under fire at all times. And don't break the game rules. "Monkey business", – a violation when a player covers the sensors of the headband with his hand or clothes – is strictly prohibited in laser tag.

9. Don't waste a lot of time following your opponent while sitting in the shelter. Look out once and change your position. If you're spotted, you're probably on the opponent's crossings, and as soon as you show up again, you'll be hit.

10. Do not hide in enclosed spaces with only one exit. You should always have a way to retreat.

Each team needs to work out a common strategy, think out the game tactics, decide on the roles.

The following will be useful:

– Come up with short, clear phrases to make it easier to interact on the playground. With their help, you will signal the allies during the battle.

– Study in advance the playground of future games. Then you will not get lost in the first minutes of the game and will not let yourself get caught off guard.

How to achieve full team interaction?

To win the laser tag, the team must act as one. Chaotic movements on the playground will make players easy targets for an experienced opponent.

– Always conduct attacks involving multiple players at the same time. Move from different directions to make it harder for the enemy to neutralize the attackers.

– Cover your allies thoughtfully. Make sure you do not end up in the same line of fire as your team's players. Move around the playground carefully, watch for profitable positions, try not to get caught in open fire. It's possible to enter the line of fire if you want to draw fire or if the whole team is going into attack. If moving around the playground is risky, stay where you are and ensure the safety of your comrades by firing continuously at the enemy.

– Do not forget to help teammates to get rid of the pursuit of the enemy, if you see that he is running after them. And, in turn, ask your allies for help in advance so that they can neutralize your pursuers in time.

– During a defensive battle, seek out an advantageous ambush position and cover your teammates.

If you manage to hit the enemy, do not waste time and quickly take this position. After that you can "get" other players of the opposing team who can't see you. This way you can weaken the defense and prevent your opponents from launching an attack. In addition, to capture more territory, you can fire continuously from the cover at the already wounded player. The prospect of losing game points will make him leave the position.

To take control of as much of the playground as possible, spread out and play at a small distance from each other. This way you can better see what's going on around you and cover your allies.

The option, when you need unite into a big group, is possible if you have to defend the base or protect a hostage. In this case, gather in a small circle and shoot off the enemies in different directions.

This strategy can be just as effective as the attacking one. The main thing is to act clearly, coherently and follow the basic rules. Here they are:

– Set ambushes. Such a maneuver will cause significant damage if the surprise factor is preserved. Your losses will be minimal.

– Support the defenders. For example, a separate squad can cover the defense fighters in case the enemy suddenly hits from the rear. Or the squad could distract the attackers.

– Keep moving regardless of the chosen tactics. Remember: the most vulnerable target is a motionless target.

The main force of such a team is an assault squad. Experienced assaulters know that you have to act carefully and in a well–arranged manner. A chaotic attack will quickly "choke up" and the team will suffer significant losses. Here the following advice will be useful:

– Act quickly and as a team, attack with a single front. Your pressure and confident actions will make your opponents take a back seat and give up victory.

– Try to lure the opponent to the line of fire. Be provocative and upset your opponents' plans forcing them to make mistakes; it will be easier for you to turn the tide of the battle.

– Use distraction maneuvers. For example, you can send an assault squad into a direct attack, which will distract the enemy's main forces. At this time, a saboteur group will sneak into the enemy's rear and suddenly attack, smashing the enemy into ashes.

– Cover your allies. You can act more confidently knowing that your comrades will always cover your back.

Are you planning to create an ambush and lure the enemy into it? Act in such a way that the maneuver will have maximum effect.

– Do not let your allies play shorthanded.

– Take care of a reliable protection for the ambush site.

– During an attack, you should be able to see as much of the area as possible.

– Once you understand that the surprise factor is lost, move on to defense.

– While you're waiting in an ambush, sit down and get ready to shoot from your knee. That way you have a better chance of going unnoticed.

Of course, the techniques described are just the required base. In the arsenal of an experienced player there is always a selection of cool tricks based on years of practice. And it's great, because, as in any sport, different teams and individual fans of laser tag have their own unique style. Play, sharpen your skills, conquer new heights. May laser tag be with you!