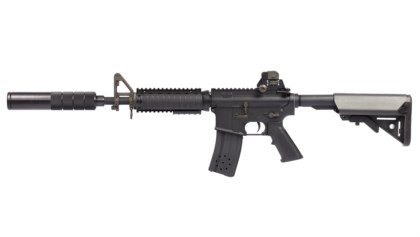 COLT M4 - an automatic carbine developed in USA, based on the M16A2 rifle. The weapon was originally designed for combat vehicle crews, weapons and military equipment. The difference from the "big brother" is only in the shortened barrel with a foregrip and the telescopic retractable buttstock with 4 fixed positions.

The rifle is used abroad by all combat army units. M4 performs well and is used all over the world in challenging weather conditions.

The rifle can be equipped with a solid optical system, underbarrel grenade launcher and other additional equipment, which greatly enhances the fire power and rifle efficiency. The combat version is now available for purchase from the LASERWAR online shop.

You can't say that M4-A3 is shortened in the game version. The barrel length is increased by the length of the barrel tube. But it cannot be said that it spoils the appearance of the model. On the contrary, any LASERWAR optical system complements the external rifle design.

If you look at the appearance of assault taggers, the M-series is probably the most detailed. The weapons are stuffed with rails, telescopic buttstocks, reloaders, folding foresights and backsights and firing mode switches. The M-series in its different variants can be often seen at laser tag games.

Centurion is no exception. The tagger can be fitted with a tactical grip, belt and collimator sight. There are no borders for your imagination. Although even without additional equipment, the tagger looks modern and stylish.

The game set has bolt reloading. The fire mode selector retains its normal function. The game set is fitted by default with a diopter sight, which can easily be changed to any other optical system. The buttstock is telescopic and can be locked into several positions.

The body design includes an OLED display at an additional cost. The body is made of metal with elements of weapon plastic. Weight - 2.73 kg, length 92 cm.

The basic scope of supply includes a rifle. Hit sensors, sights, grips and chargers are to be purchased separately. Regarding the grips, we recommend the LASERWAR model or the standard tactical grip.

There are no restrictions in terms of optics, the rails can be used for any. Everyone will find something to their liking. Any collimator will look good on this "baby".

The rifle runs on 9, 10, 11th generation of electronics. It also supports Parallax and Prism tube systems. The trigger pull is duplicated by a sound effect and cross-shaped illumination of the shot. On request, the Centurion can be fitted with a recoil simulation. This option is not included in the basic scope of supply. It is installed at extra cost.