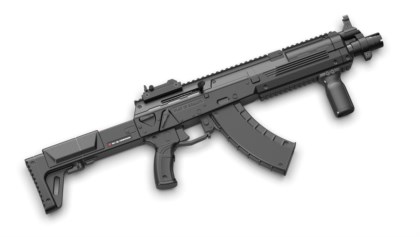 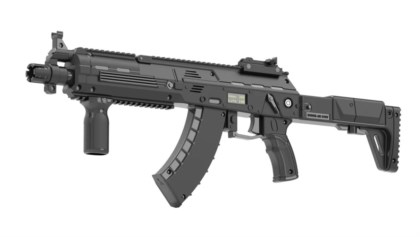 The AK-15 Warrior game set, SPECIAL series became a logical continuation of the AK-12LT Predator. It's the heir and continuator of the company's tradition.

The Warrior is new weapon with improved parameters.

The cast body of AK-15 is made of shockproof amorphous polymer. The material has high viscosity. It is resistant to breaks and cracks. It is not afraid of winter frosts, heavy rain, dust and dirt.

We have improved the design by taking another step towards realism. The bolt reloading mechanism - just like in the original Kalashnikov assault rifle - became a very important element of authenticity. Bolt reloading made another technical innovation possible. You can change fire modes: automatic, single or burst. This fire switch mode button is located on the body, it previously was used for reloading.

The AK-15 features an advanced trigger. For the first time we used a contact free shot switching system based on the Hall sensor. High-quality neodymium magnets provide excellent firing accuracy.

The weapon is equipped with the best existing optical system for laser tag – Parallax. With that system, the AK-15 is three times more accurate than taggers with the classical LASERWAR optical system – Prism. The ricochet frequency has been reduced several times. The range of fire with Parallax is on average 63% higher than with Prism. The narrow killing spot means is a game with maximum realism. To hit the opponent, you need to aim carefully – just like in a real battle.

The possibility of installing an additional battery increases the battery life by at least twice as much without recharging.