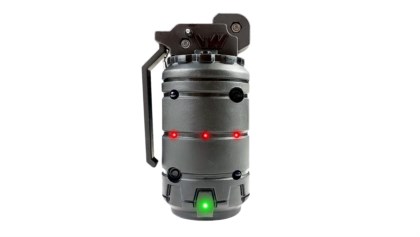 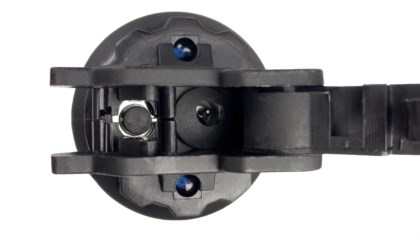 Now it's time to introduce you to LASERWAR's lightest "explosive" device, the Trinity laser tag grenade. The device fits in your hand and weighs only 140 g. When designing the grenade, special attention was paid to its durability. After all, this is the device that is most exposed to physical impact - thrown to the floor and against the wall. Sturdy gun plastic was chosen as the basic material. In addition to external factors, constant interaction with the player was taken into account - the trigger lever must be pulled to activate the grenade. Gun plastic can withstand those stresses as well.

Six infrared diodes are fitted in the grenade body, two of which are located in the upper part. Trinity is another device for realistic play. It replicates the features of a real explosive device. The grenade is functional, with no superfluous details to be found in its design, making it look authentic.

The device strikes players from a distance of 20 to 10 m. The affected area increases indoors and decreases outdoors. The grenade goes off only when the lever is pulled. If you press and hold it down, the "explosion" will occur when the lever is released.

The main functions of the device are to kill players in the vicinity, blow up and stun. The grenade requires no charging and runs on two AAA batteries, the sturdy body and secure connection of parts protects all electronics. Even after prolonged impact on the wall, you won't have to reassemble all the internal components and buy a new device. Trinity will also endure two weeks of uninterrupted play.

The ideal game is one with no pauses or interruptions to set up equipment, everything should be done in seconds. The grenade changes parameters literally at the touch of a button. To switch to Admin mode, hold the lever for a moment. If you hear a beep, you are in the settings. By repeatedly pressing

There are many secrets behind this seemingly small and inconspicuous device. You will be delighted with the low price of the game set. The product is available in the LASERWAR online shop.