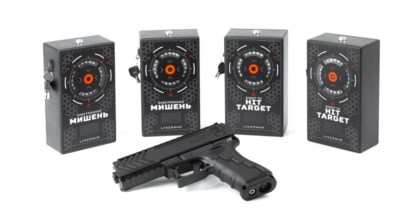 The electronic RGB target is yet another device in the line of additional equipment updates. This is a must-have device for a rental club owner. Use it to adjust your rifle and while away the time before the start of a round. The new version has an added small display, an updated design, and a new control system. But first things first.

The front panel of the target has been changed. The approaches we have adopted are effective as always: a highlighted shot area, English language sound support, and a brand logo. The final result came out excellent. The target doesn't look like a mere piece of plastic. At the very first gaze, this is a 100% functional device. You can select a device with English or Russian stickers on it.

The rest remained the same: there is a power socket at the side of the target and a special lock for turning on the device. The device comes with a 2.2 Ah lithium battery that ensures 15 hours of great work. Its weight is 900 grams.

The backlight has become more noticeable in the new version. Instead of four large LEDs we now have as many as twenty LEDs, which are arranged around the circumference. The 4 sections will acquire the color of a player's team when the target is hit.

At the bottom of the target there is an indicator. Depending on the operating mode, it will show the number of hits, a Player's ID or weapon damage. The display will be very useful during configuration process. When turned on, the target shows the power level. A player will know when he must charge the device.

The new version of the target can be programmed. Using any LASERWAR remote you can change the sound, brightness level as well as illumination type.

The "new game" button resets the hit counter, and the "kill a player" button allows you to enter admin mode. If you set up the device, it won't respond to shots from a weapon. The display will show more details about the selected parameter.

In admin mode, use the "kill a player" button to switch between modes. Select a mode using the "new game" button. You will find the list of target settings below.

1. Indication — what appears on the target display after firing a shot.

If a player doesn't perform any action within 3 seconds, the device will start in the usual mode.

If not used for 5 minutes, the device will automatically turn off. Shoot the device or turn the key to make the target active again.